Just as all families are unique, it’s safe to say that all have their own individual issues and, accordingly, suburban family life has long been fodder for theatrical works. In the case of From Darkness Steven Oliver’s take comes with humour but so much more; the darkly funny drama is, at its core, about bigger issues than just inter-generational disconnect as it explores a spiritual force and a family’s need to connect with it. 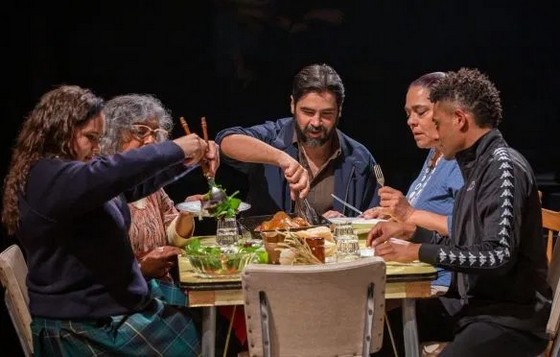 The story begins on the anniversary of Vinnie’s death. His brother, 17-year old Preston (Benjin Maza) is being visited by spirits— seemingly tormenting him while he sleeps. His sister, Akira (Ebony McGuire) buries her pain in her phone. Their father, Eric (Colin Smith), is in denial and their mother, Abigail, is numbing her pain with ‘Jim, Jack and that Southern mob’ companionship. Under Isaac Drandic’s direction, things pace along meaning that once force-of-nature Nan (Roxanne McDonald) arrives on the scene the family’s disconnect unravels swiftly in banter that becomes less playful and more accusatory, filled with explicit language, included not for shock value’s sake but to give authenticity to its dialogue.

There is power in the momentum as its storyline paces along, meaning that the show’s 70-minute duration seems to fly by from dinner preparations to sitting down to share the family meal. While we are only provided with a snapshot of the family member’s lives, without full resolution there are enough steps towards solution to see us satisfied as audience members in reminder of how the first step to changing minds is healing hearts.

The production’s Indigenous cast is each stellar in their portrayal of characters with inner turmoil manifesting itself in interpersonal conflicts and a family divided. Of particular note, Roxanne McDonald is a joy as the family’s dynamic Nanna matriarch; perfectly timed in her sassy, whip-smart observations, she has the audience repeatedly in hysterics of laugher, which serves as an obvious juxtaposition to the pathos of Colin Smith’s Eric, trying his best to keep the peace between his wife and mother, while remaining stoic in his paternal grief.

From the show’s initial scenes, it is clear that there is a spiritual force present in the house. Alongside an understated set, beautiful visual, sound and lighting design (Keith Deverell, Guy Webster and Ben Hughes) combine to paint a wonderfully evocative imagining of the something otherworldly that Preston is experiencing, making experience of the show quite moving. 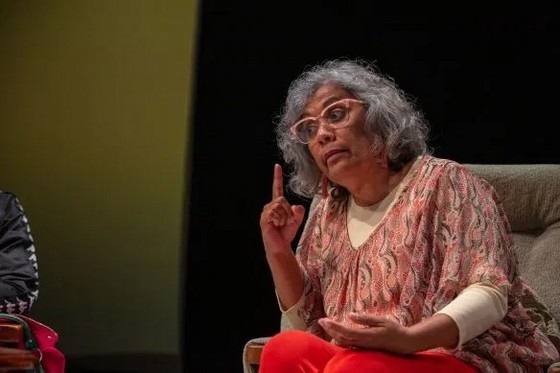 More than just providing a contemporary view of an Aboriginal Australian family, From Darkness offers exploration of the individualistic nature of grief and the ripple effect of tragedy which gives audiences much to contemplate. Its theme of connection too, is one that easily resonates, beneath any initial reaction to its sharp humour. Indeed, its ability to insert so many laugh-out-loud moments into such an otherwise dark storyline, is a testament to Steven Oliver’s script. And its focus on Aboriginal spirituality rather than politicisation evokes a wider consideration of modern Aboriginal Australian life.

From Darkness is a quality new and important Australian work of a story that could be anybody’s. The world premiere of the La Boite and Brisbane Festival co-production brings a breadth of theatricality and engaging performances to provide audience members with a thoughtful and entertaining experience.

From Darkness is playing at the Roundhouse Theatre, Kelvin Grove until 28 September 2019.