No one is ever going to call singer/songwriter Bill Mallonee an under-achiever. His latest release, a 10 song full-length effort, Forest Full of Wolves is his 78th album by his own count. Mallonee spent the 1990s fronting Vigilantes of Love, shuffling from one label to the next. They drove a van coast-to-coast playing every alternative rock/Americana friendly venue who would let them. His friend, Peter Buck (R.E.M.) co-produced one of the band’s early more-acoustic albums, The Killing Floor. The band’s 1999 album Audible Sigh was produced by Nashville’s favorite side-man Buddy Miller, and includes a guest vocal by Emmylou Harris, as well as some of Mallonee’s best loved songs. Paste Magazine has named him one of the 100 greatest living songwriters. 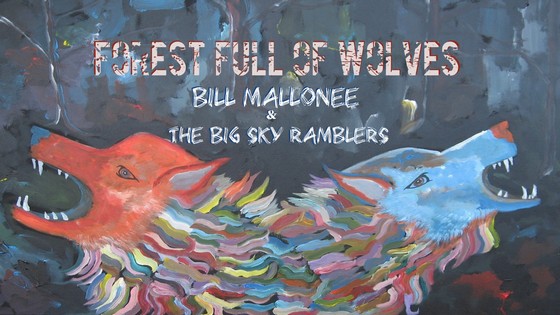 A rough count, say there were 10 songs per release (usually more), puts Mallonee’s songwriting output at nearly 8,000, and those are the ones he’s recorded. Now basic logic would suggest that they can’t all be good, and surely not all of them are memorable, but Mallonee’s work, his actual raison d’etre, has proven especially consistent over the decades. In the 2010’s he’s delivered a solid album’s worth of tunes each year, with a noticeable uptick in production values starting with 2011’s The Power & The Glory. Last year’s excellent The Rags of Absence was a case in point, with Mallonee especially attentive to his lead guitar parts.

Forest Full of Wolves continues to chronicle the challenges to working class people and even songwriters. It’s as if Mallonee is creating his own version of John Steinbeck’s Grapes of Wrath for what he calls this “new dark age”. “Greed and fear (have) gained the upper hand,” he sings in “Changing of the Guard”. So he’s “grabbed a guitar & a notebook or two… became a phantom with some conjuring ‘neath the moon.”

Musically, Wolves takes the energy of Rags to the next level, with bigger, noiser guitar tones. Mallonee captures a Neil-Young-jamming-with-Crazy-Horse-in-the-garage vibe throughout. This is likely a lot harder to pull off since Mallonee’s playing all the instruments. Mid-tempo alternative country rock at its most earnest and relevant, and against all odds, Mallonee manages to offer a word of hope. In “The New Dark Age” he sings, borrowing the title from a different song that he recording on 2014’s The Winnowing, “the best thing you can do is fall in love.” Of course, “Love Is Always Risky Currency,” but it’s the best chance any of us have of surviving in this “Forest Full of Wolves.”

Like many artists scrambling to make art in the challenging digital marketplace and survive financially, Mallonee has struggled. He tries to connect with Americana fans and break ground with new audiences. As a fan who first heard him live in the early 90’s, Bill Mallonee is one of those best-kept secrets. You really want to share his music with the rest of the music-loving world. It’s artists who wear their passion on their sleeves, who keep pouring out their hearts in songs, that make the music that matters.