UK actor Maddie Rice delivers a pitch perfect performance in Fleabag. She doesn’t miss a beat in an absorbing hour that starts off with a job interview from hell.

She says and does all the wrong things. The business owner – who turns out to have a few skeletons – wants to terminate the conversation within seconds. From there, Rice unpacks her character – Fleabag’s – life, in all its infinite ugliness. Surprises and deviations – in more ways than one – are the stock in trade.

Fleabag operates a guinea pig-themed café that isn’t exactly flourishing. Her live-in boyfriend, Harry, packs his bags and leaves. He’s just broken up with her for the umpteenth time, due to her appalling behaviour. Mind you, she’s certain that, as always, Harry will be back. In the interim, Fleabag sees an opportunity to carpe diem (seize the day). 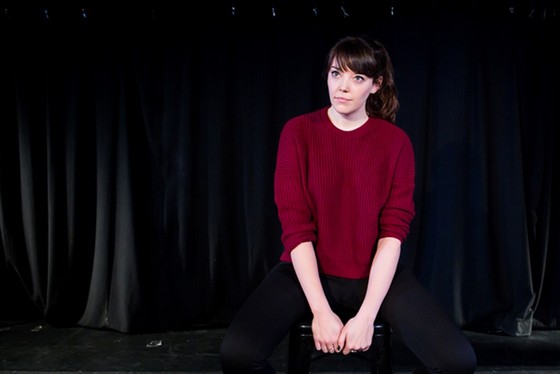 The show was originally conceived by British writer and performer Phoebe Waller-Bridge at the 2013 Edinburgh Fringe Festival. Now, under the direction of Vicky Jones, Rice has given it a new and entirely fulfilling voice. She is bold, bawdy and belligerent, and could just set the feminist cause back a century – all in good fun, of course. She delivers from a stool in the middle of a square of carpet … and what impact she has!

Fleabag is a show ideally suited to those not easily offended because the proverbial envelope is not so much prised open as exploded. Revel in the misbehaviour. Fleabag is playing at Beckett Theatre at Malthouse Theatre until 22 April 2018.