Three hilarious visual gags are among the highlights in Blockers. This hit-and-miss comedy is likely to spawn a cult following like The Hangover or Bridesmaids.

For decades – starting with Porky’s and extending to the likes of Superbad and American Pie – we’ve watched on-screen versions of guys boldly and bawdily celebrating the first time they have sex. So in the interests of fairness and equality, it could be argued that it was high time that women got to celebrate the story of their initiation. With her directorial debut, Blockers director Kay Cannon (writer of the Pitch Perfect series) has created a coming-of-age comedy that and upends a long-held double standard. Brothers Brian and James Kehoe wrote the script. 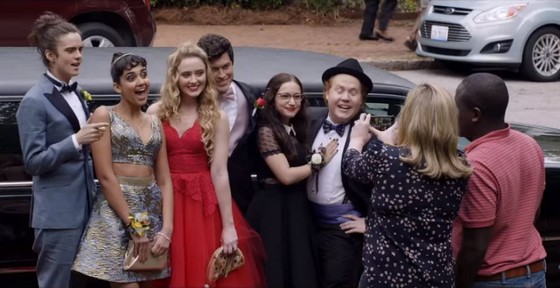 Lisa (Leslie Mann), Mitchell (John Cena) and Hunter (Ike Barinholtz) have been thrown together by fate, with their daughters becoming fast friends on the first day of kindergarten. As their inseparable girls grow into teenagers, these parents share in their children’s special moments, from birthdays and heartaches to first dances and now prom.

Their respective personalities are as different as their parenting styles. Single mom Lisa and daughter Julie (Kathryn Newton) are more like besties who share everything with each other. Hard-core athlete and doting dad Mitchell puts his blood, sweat and tears into rearing Kayla (Geraldine Viswanathan) with wife Marcie (Saraya Blue). After an ugly divorce, slightly unhinged Hunter dips in and out of life with daughter Sam (Gideon Adlon) – only to crash her prom night with the goal of making her evening epic. After stumbling on text messages that reveal a sex pact among the youngsters, the parents join forces on a misguided mission to keep their daughters from making what they believe is the biggest mistake of their lives.

Younger audience members, in particular, are likely to have a ball with the lewd material on show here. I felt the film got better as it progressed. But much of it is dumb humour. Plenty of stuff didn’t reach great heights. Then again, some well-crafted and choreographed jokes really hit the mark.

For such a politically incorrect movie, it’s quite politically correct. By that I mean the sexual humour is often really out there; but the filmmakers have been conscious of playing both the same sex relationship card (alongside the heterosexual hook-ups) and the ethnic diversity one.

Mann (This is 40) is a real triumph as the single mum who won’t let go. Cena (Trainwreck) draws a few laughs (or groans) with a running joke about how emotional his character gets. Barinholtz (Bad Neighbours) provides a strong foil for the pair. Mind you, I felt that, at times, the acting appeared forced. A couple of American sporting references might not resonate with Australian audiences; although, to be fair, Aussie Rules gets a mention.

Blockers is bound to do good business because it pushes the envelope while remaining warm and caring.