The Endless is a mind-bender that doesn’t make sense and gets weirder the longer it goes.

Two brothers – Justin (Justin Benson) and Aaron (Aaron Moorhead) – have escaped a death cult. But they struggle to make ends meet and make something of their lives when they return to society. They live in poverty in a shared studio apartment in Los Angeles. Nearly 10 years have passed since they broke free and both are still in therapy. Still, Aaron is strongly drawn to the sense of comfort and security that the cult offered him. So, reluctantly, Justin agrees to revisit the camp where they lived, just for one day. 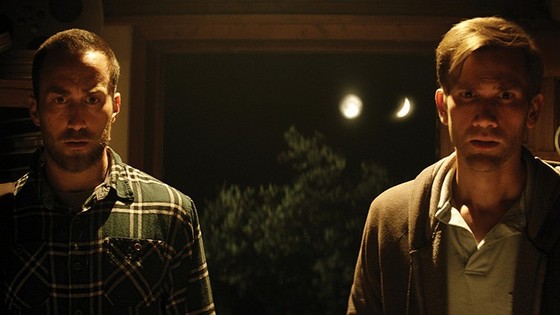 The people seem nice and welcome them back. But the strange goings-on – of which they have vague memories – are still there. The cult leader, Hal (Tate Ellington) – who doesn’t like to be known as such – is still trying to work out a complex mathematical equation, which leads to who-knows-where. A bearded man makes a good home brew. An artist from a mental facility now calls the camp home. And then there are others, like the apparently wild man who snubs everyone and just walks quickly. Or the woman who writes notes about keeping quiet and is looking for her husband who disappeared in the area. Overhead are not one, but two moons. And a third is being formed, which may well mark doomsday.

If these thoughts appear to be the rantings of a madman, then at least I’ve captured your attention – just as Benson and Moorehead have with this science-fiction mystery. The pair direct the film as well as playing the leads. Benson also wrote the piece, while Moorhead served as director of photography. They both receive producing credits – a good way to keep costs down on an independent feature!

They play on the close relationship between the brothers to overcome a major hurdle in life. The pair are believable throughout. Tate Ellington, too, has a certain gentle charisma about his characterisation. He’s non-confrontational, but makes his presence felt.

I bought into the concept, hoping the pay-off would be worthwhile. By the end, though, as the strange stuff became even more so, I wasn’t convinced. But then, that is often the problem with movies with a good set-up – how to finish the job with not only conviction but with credibility. Benson and Moorehead have crafted an unusual story about brotherhood, but it will have limited appeal.