A gay Sliding Doors with subtitles? End of the Century is essentially a two-handed drama which serves up a meditation on relationships, the choices we make, and the fallibility of memory. 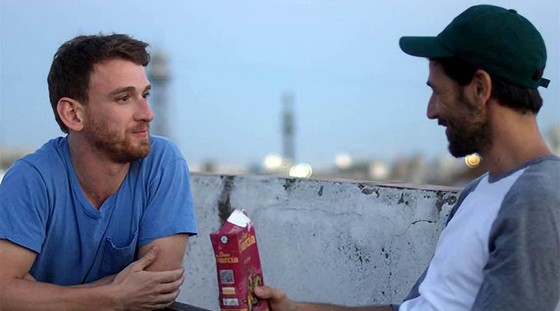 Ocho (Juan Barberini), a fortysomething Argentine poet from New York on holiday in Barcelona, meets Javi (Ramon Pujol), a Berlin-based producer of a children’s television show. Ocho first spots Javi, wearing a distinctive KISS T-shirt, walking down the street outside his Air BnB apartment. Then they spot each other at the beach, but nothing happens until Ocho again sees Javi on the street outside his apartment. He invites him up for a drink and a chat. After a hot torrid encounter and amid some nervous awkwardness, the two discuss their intimate feelings. Javi is in an open marriage with his partner. Ocho comes to realise a sense of déjà vu. It transpires that they met twenty years earlier, in 1999, when both men were still in the closet and involved in heterosexual relationships.

This is a somewhat slight premise around which to build an 80-minute feature film, and interest quickly wanes. End of the Century is the feature debut for Argentinian filmmaker Lucio Castro and he takes a minimalist approach to this variation on the what if premise. The opening scenes of the film are virtually dialogue free as Ocho wanders through the city taking in the sights. The pacing is languid and the whole thing lacks any sense of urgency or any peaks of emotional engagement.

There are a few similarities between End of the Century and Andrew Haigh’s superb 2011 gay drama Weekend, which was also a two-hander about love and desire as a casual encounter became something more. Both films are tinged with a strong air of melancholy, but Haigh’s film was a much stronger and emotionally engaging drama.

Much of the film takes place in Barcelona, and cinematographer Bernat Maestro (his first feature film) captures some great vistas of the city, with his warm sunburnt lensing. Scenes of Ocho walking through the city will also remind audiences of other romantic films like Before Sunrise. A couple of frank sex scenes are shot in unflinching fashion. But Maestro also works with long takes for a couple of scenes in which Javi and Ocho talk at length and in intimate detail about their lives.

There is genuine chemistry between Barberini and Pujol that elevates the thin material. However, some viewers may be a bit bemused as the two characters look exactly the same in the lengthy flashback sequences set on the cusp of the new millennium twenty years earlier. This was a deliberate choice by the director.

Greg King
For more of Greg King’s writing on film, check out his blog at  filmreviews.net.au