I suppose it’s almost impossible to use an exuberant color palette for a film situated in a Slavic country. Every time the story takes place in such a communist or ex-communist country, the screen is filled with depressing colors. The closer one approaches Russia (the motherland of communism) the more gray, grizzled, and duller the images become. The desolation and gloom are splashing off the screen. Everything seems bare, simplistic and simply boring. 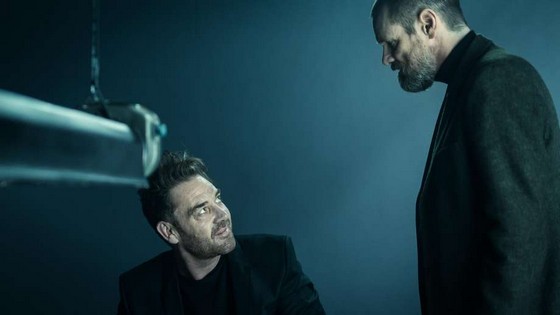 To camouflage this problem in a film, one must have a fascinating and intriguing story, played by colorful actors. But that’s missing in Dark Crimes. Even Jim Carrey has an impressive, gray beard. With a little imagination, you look at it as if it’s an old-fashioned black and white movie.

Dark Crimes is based on an article from the Washington Post about Krystian Bala. A writer who described an unsolved murder in detail in one of his books and was arrested based on this. Perhaps an interesting item to make a film about. But here the pace is similar to writing a book. Painfully slow. And Jim Carrey couldn’t remedy that by himself. This goofball who got in a fight with God Himself, who got plagued by a gang of penguins and who put laxative in the coffee of his best friend, wasn’t so bad in this more serious role. Unfortunately, his career has marked this good man. I expected any minute a spastic grin while doing an absurd dance with lots of leg-swinging. Personally, I think it’s quite logical because that’s the kind of movie role I associate Jim Carrey with. There aren’t many comedians who succeed to convince in a serious film.

The only thing this film radiates is dullness. And not just because of the scenery. The story is immensely long-winded. And as a fill-up, additional plots were added. So you’ll be presented with the story of the degraded detective and his will to take revenge on the injustice done to him. Obviously, you get the story of a detective who wants to solve the last case before he retires. A bit like Morgan Freeman in Se7en. But this time it’s because he wants to see his name fully cleared. There’s also the neglected wife who can’t longer cope with the absence and obsession of her husband. And finally, there’s the sex slave Kasia (Charlotte Gainsbourg), girlfriend of the writer Kozlov (Marton Csokas), who’s the culprit according to Tadek. She’s a drug addict and her SM past creates sinister images.

There are only a few moments you could call exciting. And that’s every time the writer Kozlov comes into the picture. His pseudo-intellectual jibber-jabber may not be essential from a substantive point of view, but his charisma and personality fill the screen completely. These were a few moments when you could feel the tension and intensity. Perhaps Charlotte Gainsbourg also caused a certain tension with some images. However, all praise for Jim Carrey who impressed me, in an otherwise not so impressive film. His stiffness, resentment and the moments in which he realises that he was wrong (with gagging as a result), are brought in an excellent way by Carrey. But that’s about it in this mediocre film.

Dark Crimes is available to rent or buy on Playstation, Google Play, iTunes and YouTube