Apparently, Joseph Stalin was an enthusiastic reader and loved the theatre. Of course, he was also acutely paranoid and one of the most evil dictators in history. In Collaborators, writer John Hodge portrays an almost-likable Stalin (or ‘JS’ as he was affectionately known by the secret police) as a contrast to the monster he is remembered as.

This black comedy is set in the late 1930’s and centres around the relationship between Mikhail Bulgakov and Joseph Stalin, who in real life are known to have communicated once or twice. Mikhail is a Russian novelist and is coerced by the NKVD (Secret Police) to write a favourable play about the early life of the Soviet union’s esteemed leader. As he grapples to even write an opening sentence, Mikhail receives an anonymous phone call giving directions to a hidden tunnel at a train station underneath the Kremlin. It is here that Stalin meets Mikhail and offers to help him with the story by providing details of his youth. 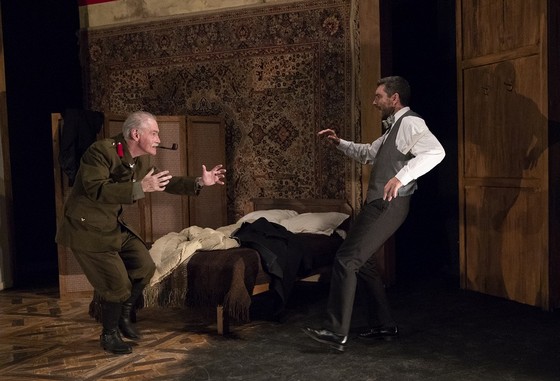 They embark on creating the play ‘Young Stalin’. In a creative twist, Stalin will type the story himself whilst Mikhail reads top secret files that Stalin brings along. Stalin even tells him to authorise the orders by initialising with ‘J.S.’. As Mikhail shows ‘his work’ to the NKVD, they are delighted, knowing that Stalin will be most impressed. In the background, Mikhail and his wife Yelena socialise with their companions who describe the drastic and horrific changes happening in Soviet life. Their good friend Vasily tells them “People go to work and never come home”. All the while, Mikhail is haunted by nightmares and wonders if he personally may be responsible for atrocities taking place. As Stalin explains: “Its man versus monster and the monster always wins”.

Very cleverly Collaborator is a history lesson told in a comical manner. We laugh uncomfortably at word pictures and statements that are grotesque but there is a message in this play about the inner turmoil of a good man aiding evil outcomes. It’s a magnificent script from John Hodge. Director Moira Blumenthal has splendidly drawn the talents of cast and crew to make a first-class production. The main set is Mikhail’s home and the stage easily accommodates other locations. You’ll be impressed with the amazing wardrobe on stage as well.

Lighting and sound effects were crucial, with spotlighting and mist creating an eerie atmosphere where needed. The skills of the set, costume and props designer (Colleen Cook), lighting designer (Martin Kinnane) and sound designer (Patrick Howard) all added to the overall enjoyment of the play. 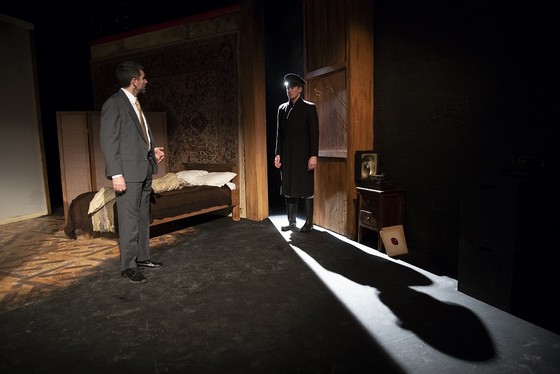 A lot of issues raised in Collaborators will make you think. It’s a world where principles are challenged, right and wrong become blurred and the worth of individuals are irrelevant. Whilst you will be well-entertained by this production, the sad fact that millions perished under Stalin’s rule is not forgotten.