All work and no play makes Christopher Robin a dull boy. AA Milne’s world is brought to life in this combination of live action and animation. 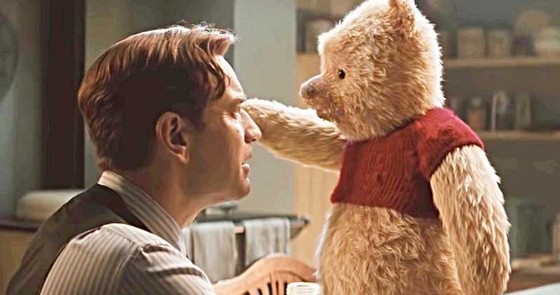 Christopher Robin (Ewan McGregor), the young boy who shared countless adventures with his stuffed animal friends in the Hundred Acre Wood, is now grown up. He lives in London and has to deal with the stresses of adulthood. As an efficiency manager at Winslow Luggage, he juggles long hours in the office with his commitments at home. He’s all but forgotten the days of wonder and make-believe that defined his childhood. But sooner or later your past catches up with you.

Plans to go away for a weekend with his wife, Evelyn (Hayley Atwell), and daughter, Madeline (Bronte Carmichael) unravel. He has to work on a project that will affect the livelihoods of his staff. Then something unexpected happens. Christopher reunites with Winnie the Pooh and his old friends from the Hundred Acre Wood, remembering the times when doing nothing with a best friend was the very best kind of something. But a romp into the woods isn’t going to solve his work problems. That’s where Pooh, Tigger, Eyeore and Piglet enter the equation.

The characters Christopher Robin and Winnie the Pooh first appeared in a collection of Milne’s verses titled When We Were Very Young, in 1924. But readers around the world embraced the characters with the publication of Winnie-the-Pooh in 1926. The short stories about the imaginary adventures of the carefree boy, his honey-loving bear and animal friends, accompanied by E.H. Shepard’s timeless illustrations, made it one of the most popular children’s books of all time.

Milne’s stories advocate the values of a healthy imagination. They represent a time in our lives when we have to say goodbye to childhood. The House at Pooh Corner ends with Christopher Robin telling Pooh he’s going away to boarding school – his way of saying life can no longer be about frivolous pursuits. It’s time for him to grow up and become more serious.

Christopher Robin is a little charmer from a bygone era. It gains traction as it progresses and can even leave one a little teary at the end. Fittingly, it is from the studio that makes dreams come true, Disney. Its contrast between the seriousness of work and the pure joy of play couldn’t be greater.

You could quite reasonably argue that with the big bad world as it is at the moment, we could certainly benefit – just as a stern Christopher Robin could – by taking a chill pill and embracing the benefits of youthful imagination. I thoroughly enjoyed the period detail and the representation of the various characters.

Director Marc Foster (The Kite Runner) breathes lives into the script by Tom McCarthy (Up) and Allison Schroeder (Hidden Figures). If you appreciated AA Milne’s work, you should find plenty to enjoy in Christopher Robin.