How often do you hear about a good girl being attracted to a bad boy? So frequently, that it has all but become a truism. And that is the case in Lanford Wilson’s (who won the 1980 Pulitzer Prize for Drama) Burn This, which opened off Broadway in 1987.

Set in the summer of 1983 against the backdrop of lower Manhattan and the raging AIDS epidemic, it was Wilson’s attempt to create a psychic map of panic after experiencing a panic attack walking down a New York street. Looking to understand what was going on around him, Wilson sat down to write and remembered a guy from New Jersey he had met seven years earlier who became his inspiration for one of the characters, Pale.

Robbie (who we don’t get to see) is a gay dancer who has just died in a tragic boating accident. The incident blindsided his roommate and the choreographer with whom he worked closely, Anna (Jessica Clarke), who is heartbroken. She is particularly upset that Robbie’s family didn’t know he was a dancer and denied that he was a homosexual. Sexual identity is a common theme in Wilson’s work. 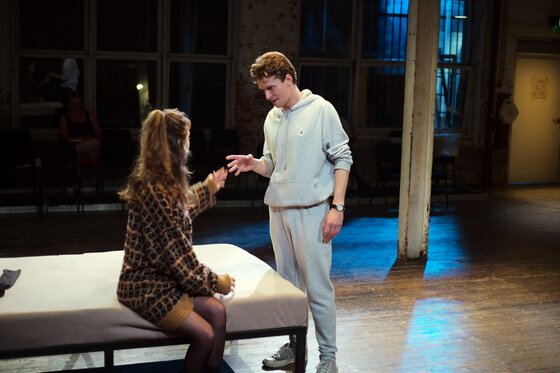 Weeks later, into Anna and Larry’s home burst a wild, hysterical, hyperactive man, Pale (Mark Diaco), speaking at a rate of knots. He turns out to be Robbie’s brother, a restaurant manager, who is high and volatile and equally distressed by his sibling’s untimely passing. Anna is disconcerted by his arrival – to say the least – and yet there is a most unlikely connection. Burn This navigates the tricky relationship between Anna and Pale. 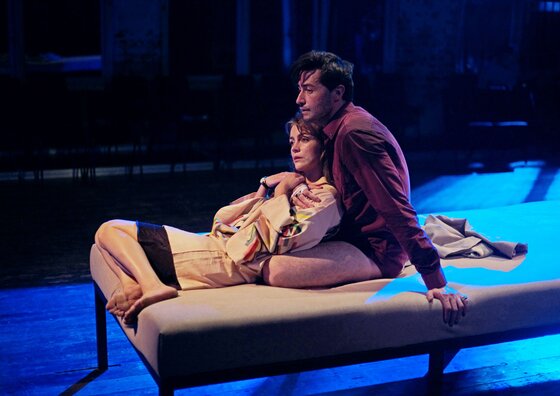 It takes a while to get a fix on what is happening here – much of the first act, in fact. A lot of words are spoken, especially those delivered by Diaco at such breakneck speed that it is difficult to take them all in. Honestly, it took me until Act II to start to appreciate the offering for what it is.

I was particularly taken by the performance of Jessica Clarke, who is given the lion’s share of the verbiage.She manages to well convey the dichotomy of her persona as Anna, whose equilibrium is thrown out by Pale’s unorthodox ways. Dushan Phillips, too, has a fine turn as Larry, the man who observes everything close up and is there to pick up the pieces. 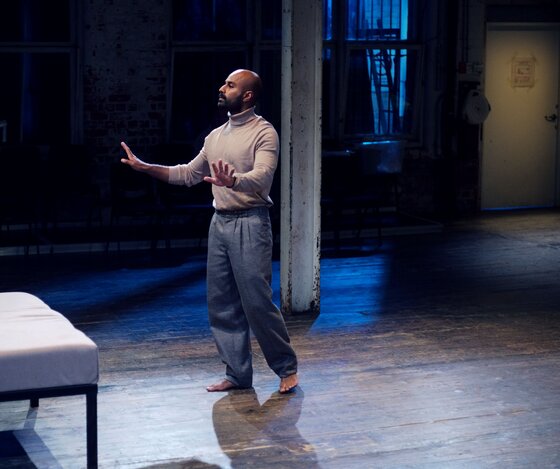 fortyfivedownstairs’ cavernous underground space is put to good use with the entire floor space, save for the distanced seating, utilised as the stage area. On one side of the oblong configuration is a couple of ballet barres and on the other a kitchen, with a large, flat sofa positioned in the middle. Insightful though it may be, Burn This won’t be to everyone’s tastes.

It is a historic, slice of life piece suggesting some relationships can’t readily be explained and don’t fit into nice, neat boxes. The second half was more to my liking, but at two and a half hours including interval, I found it too drawn out. Directed by Iain Sinclair, it is playing at fortyfivedownstairs until 7th February, 2021.