I never thought I would ever ask the following question: “Mr. Scott, could you draw a line under the whole Alien franchise and concentrate on other projects? Please?“. As an Alien fan of the first order, I was deeply disappointed about this film. In hindsight I thought Exodus: Gods and Kings was even better. It’s best they forget about Alien: Covenant Sequel which is scheduled to appear in 2019. 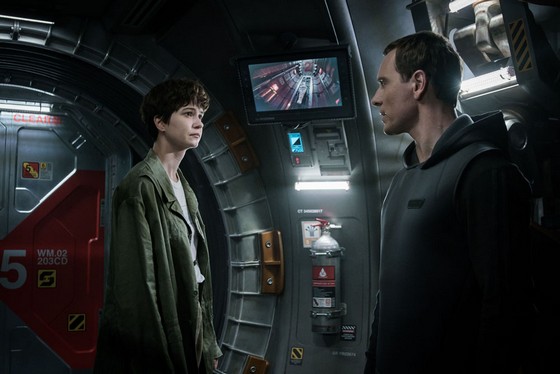 I was actually more excited about Prometheus than about this creation. I ignored the whole fuss about the religious and existential aspects in Prometheus. In my opinion Prometheus was a relief after the disastrous parts III and IV of the Alien saga. Admittedly, the xenomorphs weren’t omnipresent in Prometheus. But the graphics were unprecedented and made my SF heart race again. Scott brought a breath of fresh wind in this SF horror. In Alien: Covenant it’s more like a used wind. On the one hand, the functional goal of this film is the cause of this. After all, it’s just a bridge between the Prometheus project and the older Alien work. But on the other hand, it’s the ease with which this movie is made that lies at the base. Because ultimately it’s nothing but a recycling of old material.

In Prometheus a spacecraft was launched into space to search for the so-called creators (“Engineers”) of humanity. In the end, they discover that these creators want to wipe their creations of the table. The end of the film shows a glimpse of creatures that cause death and destruction in the Alien saga afterwards.

Now we see the spacecraft “Covenant”, loaded with colonists and embryos, which (as in Passengers) is heading for a planet in another solar system to set up a new colony. Until the ship is hit by a “neutrino burst” and the crew is shaken roughly out of their artificial sleep. When one of the crew members receives a signal from John Denver’s “Take Me Home” during a repair, they set course to the origin of the signal without hesitation. And thus they end up on a planet with similar living conditions as on Earth. Moreover, they find traces of a previous landing.

Despite the fact that Alien: Covenant is no more than a link between the Prometheus narrative and the original first episode, this movie started promising. In retrospect, however, it’s nothing more than a rehashing of previously used ideas. Even the numerous aliens didn’t impress me. The aggressive and intimidating look of the space monster in the first films ensured some terrifying movie moments. In this film, they weren’t exactly very intelligent and far from slimy. The only original twist in this film was the side those creatures chose to burst out of a human body this time.

As a die-hard fan of the Alien saga, I was waiting impatiently (even though I’m not in favor of prequels and sequels) for this new episode and I was also expecting big things. Therefor it’s a great disappointment when I saw how such an original and infamous epic story was reduced to the level of a meaningless, brain-dead soap purely based on commercial considerations.

Even though the visual aspect was of an unprecedented level (after all Ridley Scott was holding the reins) and the first half hour (despite the clichéd content) was promising, I came to the conclusion that the obtained result was shamefully bad. The aliens weren’t terrifying and at one point they looked like the velociraptors from Jurassic Park. Some scenes were basically moronic. And be honest, Katherine Waterston will never be able to match Ripley’s masterly played character. The only plus was the double role of Michael Fassbender.

When are they going to realize in Hollywood when a sequel of a successful film has nothing significantly to contribute to the story and just simply repeats parts of the original (repackaged), one can better refrain from this release. But I get it. The movie has gained a loyal crowd of fans who look forward to any new episode. It doesn’t matter how bad it is, there’ll always be a huge audience to check it out. In most cases this enthusiasm is being followed by disillusion. There are countless other examples. From Die Hard to Terminator. Or take a look at Beverly Hills Cop, Nightmare on Elm Street and Home Alone.

The pilot film is sensational and unique. In some cases, the sequel offers added value and is highly entertaining. But from then on, it usually goes downhill. There’s nothing great about these sequels. The only reason for their existence is pure commercial. Shame on you Mr. Scott. To be honest, I never expected you to fall for that.

Alien: Covenant is now available on your favourite home entertainment platform and on streaming services.