What was the overall feeling after watching Atomic Blonde? For me it was a mixture of confusion and excitement at the same time. Confusion because of the complex story with a multitude of twists and spy-related mumbo jumbo. To be honest, I always have that with this kind of movies. So you can assume that I’m not a big fan of espionage movies. Not even James Bond movies. Even though these story lines are rather straightforward and simplistic in my eyes. Atomic Blonde on the other hand is in a different league.

At a certain point I didn’t know what was going on and what role the main characters played. I even forgot the main goal. The only things I still could re-imagine in the end, were the fierce action scenes and the appetizing looking curves of Charlize Theron. Should all female spies in a movie use the same wardrobe as Theron did here, I instantly would become a fervent fan of this genre. There’s nothing so exciting as a blonde shrew, wearing sensual knee-length boots and sexy suspenders, who gives her male opponents a solid kick in their glockenspiel. 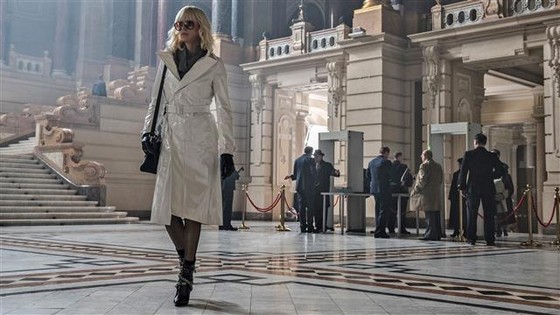 Guess what. I was more excited about the soundtrack. Perhaps this was disruptive to some but personally I thought this was pleasant addition. Well, maybe it’s because I’m a hard-core fan of music from the 80’s. And I’m not talking about boy bands or disco music, but the underground and alternative kind of music. Unfortunately, they had to choose the most annoying song from the entire Neue Deutsche Welle repertoire.

During that period I often wished for Nena to disappear with her 99 air balloons beyond the horizon. It would have been way better to include “Stunde des Glücks” from Fehlfarben or “Schlachtet!” From Grauzone. But besides this weak moment, I was pleasantly surprised to hear “Cities in Dust” from Siouxsie & the Banshees, “Cat People” by David Bowie and “I ran” from A flock or seagulls. In terms of mood, this musical framework certainly made for a positive feeling. In retrospect, I’ll remember this playlist more than the movie itself.

It’s all about an ultra-secret list (hidden in a wristwatch) with names of spies who are actively working in the Soviet Union doing … uh … I suppose spy-work. The entire film is situated in dark Berlin of the 80’s, where the ultimate symbol of the cold war still stands. The Berlin wall. It’s in the shadow of this gray decor where this spy movie takes place. In this post-war city, Lorraine Broughton (Charlize Theron) tries to get the list back together with fellow spy David Percival (James McAvoy), who has his own agenda apparently.

The fact there are other sharks in this spy-pond who are interested in getting that list, is something Lorraine experiences real soon. The entire story is displayed in flashback mode. The whole story is being told by Lorraine during a debriefing in the presence of Eric Gray (Toby Jones), some superior at MI6, and Emmett Kurzfeld (John Goodman) from the C.I.A. What follows are some badass action sequences that’ll thrill you. Unfortunately, these impressive, action-filled scenes are no guarantee to make it a memorable movie .

Perhaps it was the intention to make a female John Wick spin-off. But unlike the latter, where action scenes followed each other at a breathtaking pace, this movie only contains three (sublimely choreographed) violent  action scenes. First the German Polizei notices that the colour of their green uniforms is replaced by the colour of emerging bruises and dripping blood. And as icing on the cake you’ll be presented with a damn elongated scene where KGB agents are being banged up pretty bad. Next you’ll see an intense car chase across Berlin. And then you’ll get a plot twist involving double agents and counterespionage shizzle. And that’s where I suddenly lost the thread. To be honest, that’s it in a nutshell. Even the lesbian it’s-supposed-to-be-a-hot scene wasn’t interesting enough to get me ecstatic. In my view, this was added just so the presence of Delphine Lasalle (Sofia Boutella) seemed functional again.

In terms of acting, it was quite all right, although Charlize Theron impressed me more as Furiosa in “Mad Max: Fury Road“. James McAvoy was sublime. But then again, I thought he was more convincing as the guy with a split personality in “Split“. Eddie Marsan, John Goodman and Toby Jones complete the rest of the cast and showed once again their acting skills.

But despite the brilliant acting, the violent and furious action, the atmospheric images and a soundtrack which made me feel young again, I thought the storyline was incoherent, quite inconsistent and superfluous. You can’t call it the counterpart of John Wick. And for those who say this film is amazing because of the fact that it’s an action movie with a female action heroine in it, I suggest to look up these movies and rewatch them : Alien, Terminator, Salt or Kill Bill. You’ll also see an action heroine with giant cajones, who’s filletting the other sex (or species) without blinking an eye. But still, highly recommended.