The 1947 play A Streetcar Named Desire is the most celebrated of Tennessee Williams’ works. The classic drama is poetically symbolic but also grimly naturalistic, as represented by the detached but detailed staging of Brisbane Arts Theatre’s production. The staging emphasises the play’s symbolism through its use of glassless mirrors and also aesthetically.  The lighting invites its audience into both the sweltering New Orleans heat and the tiny, tension-filled, rundown,  two-room tenement of Stanley (Regan Warner) and Stella (Claire Argente) Kowalski. Ryan McDonald’s lighting design reflects the work’s darker themes of shattered illusions. 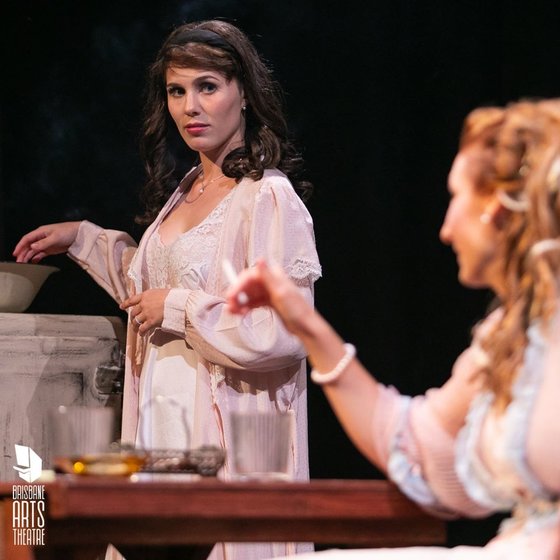 Erin Tribble’s costumes capture the post WWII era and distinct characters, while Zoe Power’s sound design authenticates its setting with the echoes of passing New Orleans French Quarter streetcars. It is one of the Desire line cars that Blanche Du Bois (Victoria Darbro) takes to visit younger (but-not-really) sister Stella and her common Polack husband Stanley, seeking refuge after the loss of her family estate.

What follows is a passionate but brutal story of toxic relationships and troubled people as Blanche finds Stanley brazen and abusive, while Stanley is suspicious of Blanche’s motives. Like the languor of a steamy Louisiana afternoon, A Streetcar Named Desire is a long show – at  just over three hours’ duration (including two 10-minute intervals) – which only makes the efforts of its performers all the more impressive.

The cast is excellent. Warner, who gave a commanding performance as John Proctor in 2018’s The Crucible, makes for a youthful Stanley but is otherwise up for the job as the chiselled and animalistic antagonist. His presence is undeniable, even as he finds the script’s humour in searching through Blanche’s trunk of precious costumes and jewels. However, laughs soon give way to more sombre sentiments in the Kowalski’s abusive marriage and the collapse of Blanche’s world.

Darbro is compelling as the fragile, faded belle Blanche, even if her delicate mental condition is apparent from the outset, leaving less room for her later fall. Still, her passive-aggressive, too-good-to-be-true refinement and nervous anxiety as the demure, pampered Southern belle leaving behind a life of loss in small-town Mississippi, is one of the best I have seen. Her accent is integral to her performance, rather than serving as a distraction. She handles a costuming slip-up without missing a beat, although her monologues are not always as powerfully delivered as, perhaps, they could be. 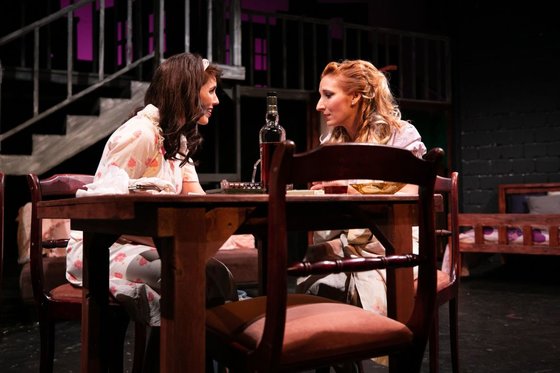 Argente does justice to the complicated role of Stella. Passionate – in contrast to Blanche’s cool detachment from reality – but also calm and practical in the midst of chaos, she also captures the complex sensuality of Stella’s relationship with Stanley. Indeed, Argente and Warner are magnetic together – whether fighting or reuniting – as the troublesome couple. Solid in support is Jon Daabro as the decent and trusting Harold ‘Mitch’ Mitchell, the most mannered, but also meek, of Stanley’s poker-playing friends. He shows Blanche kindness, but is blind to reality as his feelings are trifled with, meaning that we feel thankful when he gets to say exactly what is on his mind.

A production of A Streetcar Named Desire is a formidable undertaking. Not only is it a southern Gothic masterpiece, but it has integrated into popular culture. That means that even those new to its experience on stage will likely have some familiarity with its most famous quotes, courtesy of pop culture staples such as Seinfeld or The Simpsons. This is no museum piece though. The searing reality of the play performed is an intense experience, especially given its explosive depictions of domestic violence. In Brisbane Arts Theatre’s hands it is an intensity that results in excellence all around. Streetcar is on until 29th February, 2020.