A sad and angry man is rescued by a most unlikely source in the moving A Beautiful Day in the Neighbourhood. 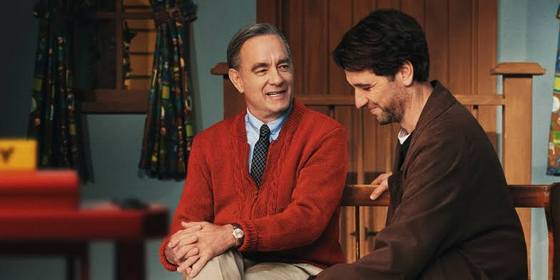 For more than three decades (1968 to 2001) Fred Rogers was the most beloved figure on US television. He imparted words of kindness and wisdom to millions of children on PBS’ long-running program Mister Rogers’ Neighborhood.

In a fast-evolving world where young children grappled with a growing array of difficult issues and often may have felt misunderstood, Mister Rogers took the time to listen, understand and connect with them.  That is how he earned his status as a cherished source of comfort for a multitude of Americans.

We saw his story in an excellent 2018 documentary Won’t You Be My Neighbor.

A Beautiful Day in the Neighborhood is not a feature film along similar lines, although that was what I was expecting. Rather, it is the story about Rogers’ impact on a tortured soul – a hard-nosed journalist with a deeply troubled past caught way outside his comfort zone when tasked with writing 400 words about Rogers.

When investigative New York journo Lloyd Vogel (Matthew Rhys) is assigned to write a profile on Mister Rogers, he approaches the children’s icon with cynicism, not believing that anyone can really be that good a person. But he is immediately thrown off guard by Rogers, disarmed by his honesty and the way he seems to somehow look into his soul.

Suddenly Vogel’s gaze turns inward. A new parent, with a troubled childhood, Vogel is forced to reconcile with his jadedness and pain. Famously, Fred Rogers had an uncanny ability to turn interviews around on his interviewer and that cat and mouse game is the catalyst for the movie. The film was inspired by award-winning journalist Tom Junod’s 1998 Esquire profile on Fred Rogers (“Can You Say…Hero?”) and the real-life friendship that developed between the men.

The two leads are exquisitely realised by Tom Hanks and Matthew Rhys, who play characters who on the surface of it should have never met. First a character study was not Vogel’s beat. He was used to ripping his subjects to shreds.

Secondly, his whole demeanour was the polar opposite of Rogers.

It is remarkable how Hanks is able to so readily step into Rogers’ shoes. While watching this film it is hard not to think: “just where did this guy come from?” He is far too nice and too naïve to be real, which – is of course – Vogel’s starting point.

It is difficult to go toe to toe with an actor of the calibre of Hanks and come up trumps, but that is what Rhys does. Effectively, although his character is married to a pragmatic, intelligent woman with whom he has just had a child, Vogel has all but shut down. He is far from the best version of himself. That dark cloak hangs over Rhys’ characterisation like a heavy pall that cannot be shifted … until he lets in some light.

There were several scenes in which I shed tears. When I set foot in the cinema, I clearly had no idea what I was in for, but I greatly appreciated the tale that unfolded and the way it was realised.

That started with the writing by Noah Harpster and Micah Fitzerman-Blue (two of the three writers on Maleficent: Mistress of Evil), who approached the subject matter with sensitivity, reverence and drama.

A lot of credit must also go to the direction of Marielle Heller (Can You Ever Forgive Me?), who lets the material breathe with deliberately unusual silences and what in any other realm would be regarded as awkward moments.  Rated PG.