British author E.L. James’ novel Fifty Shades of Grey “struck” a chord around the world, just as Christian Grey loved to “lash” Anastasia Steele. Featuring bondage and sadomasochism, it was translated into more than 50 languages and has sold well over 100 million copies. Of course, further books followed and then a film series. The first movie raked in a whopping $800 million plus at the box office. Given the risqué subject matter, it only made sense that it would spawn a musical parody. And in 50 Shades! A Musical Parody, the writers and lyricists milk it for all it’s worth. 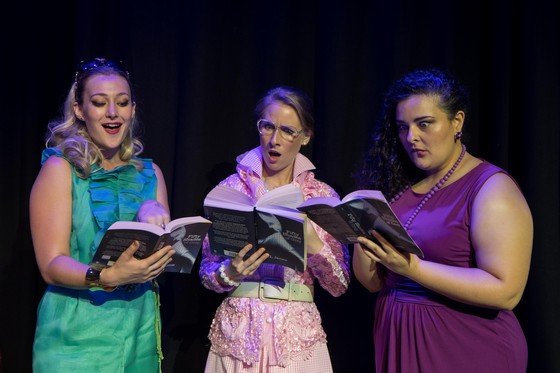 The language is colourful to say the least. The show is hilarious. It puts a huge smile on your face and is perfect for a girls’ night out (males in the audience were outnumbered at least 10 to 1 … probably 20 to 1). Of course the show relates the story of Anastasia and Christian, though in short form. It also showcases some beefcake and explores the secret passions of three gal pals whose choice of reading matter leads to an epiphany.

The production highlights the top vocal and acting talent that is Kala Gare (Rent at Chapel off Chapel). She plays the naïve Anastasia, whose sexual awakening is anything but ordinary. Gare has a superb voice. Some of her facial expressions are priceless as she revels in the role of good girl corrupted. James Elmer (So You Think You Can Dance) brings some of Christian’s quirks to the fore, including his phobia about being touched. Congratulations to Elmer for his professional handling of an awkward few minutes when his microphone failed on opening night. He put it down to “raccoons in the air vents”.

I particularly liked Luke Wilson’s deliberately exaggerated portrayal of Jose, whose clunky one-liners and heartfelt passion aren’t enough to turn Anastasia from a friend into something more. Talking of big voices, Bianca Bruce opens up and draws huge applause as the larger-than-life Pam. She’s one of the three book club ladies, and her sex life takes on another dimension once she’s leafed the novel in question. Belinda Jenkin too is a standout as the timid and puritanical Carol. She’s another member of the trio, alongside the far more adventurous Bev (Hannah Kee).

Anastasia’s roommate Katherine (Elise Muley) has quite a mouth on her and shares a few choice scenes with her bestie. Ossie McLean sizzles as a sex object who’s capable of some mean tumble turns, while Dan Ham is cast as Christian’s brother Elliot. 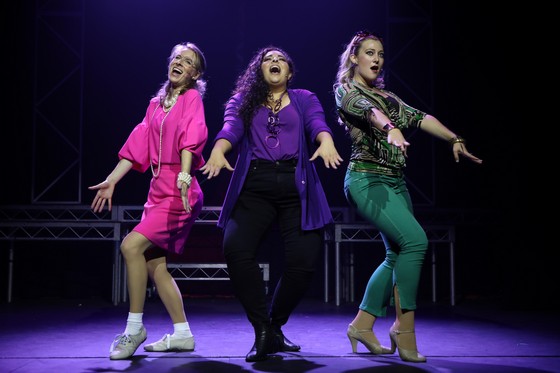 With a bare industrial set, the show’s magic can be put down to the writing. Albert Samuels, Amanda B. Davis, Emily Dorezas, Joseph Shelton, Ashley Ward and Dan Wessels are responsible for all of it, including music and lyrics. The show features 12 original songs, including “There’s A Hole Inside of Me” and “I Don’t Make Love”, which could even make a sailor blush. David Venn (who’s also producer) directs and Daniele Buatti provides musical direction.

What’s not to enjoy? 50 Shades! The Musical Parody revels in the ribald. It’s playing at Alex Theatre in St Kilda until 7 April 2019.