Mayhem abounds in Travesties. Set in Zurich in 1917, the play follows a British consular official, Henry Carr, who locks horns with a Dadaist, Tristan Tzara. Dadaism is an artistic movement that started around the First World War, meant to ridicule the meaninglessness of the modern world.

Carr also falls for Cecily, a librarian with a soft spot for Russian revolutionary leader Lenin. Meanwhile his younger sister Gwendolen is courted by Tzara. The play is the work of Czech-born British playwright Tom Stoppard. In it, Stoppard pays homage to Oscar Wilde’s The Importance of Being Earnest and to William Shakespeare. Jennifer Sarah Dean directs this production. 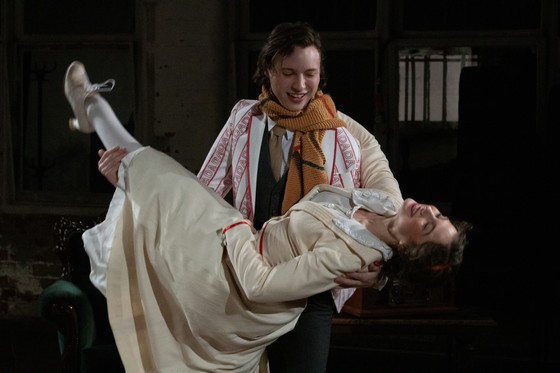 Travesties is a hoot, but frequently quite barmy. The premise has Carr reflecting on times past. But my advice is not to try to follow the storyline too closely because it can do your head in. The story doesn’t use a conventional narrative. Some scenes are repeated up to three times in different ways. The action jumps about between 1917 and several decades later.

Undoubtedly the best scene in the play comes when Gwendolen enjoys a lyrical a capella duel with Cecily. While that’s happening, Henry’s manservant Bennett tries to keep the tempo of the witty sparring by thumping his chest and letting out musical sounds. Brilliant. This alone is worth the price of admission. Another delicious scene involves James Joyce, Gwendolen and Tristan Tzara.

Overall I preferred the material after interval. Apart from being shorter, it made more sense to me; with subterfuge at its core. Confusing language is thrown around at rapid pace, especially in Act I. Even bits Russian and French appear.

Among the eight-strong cast, several stood out. Joanna Halliday rips the lid off the delightful Gwendolen. She can act. She can sing. And some of the facial expressions she pulls are priceless. Matthew Connell has a wow of a time as Tristan Tzara, provoking and wooing as the case dictates. Jonathan Peck makes an immediate impression as Irish writer James Joyce, a man who just can’t seem to match his jacket with his trousers. 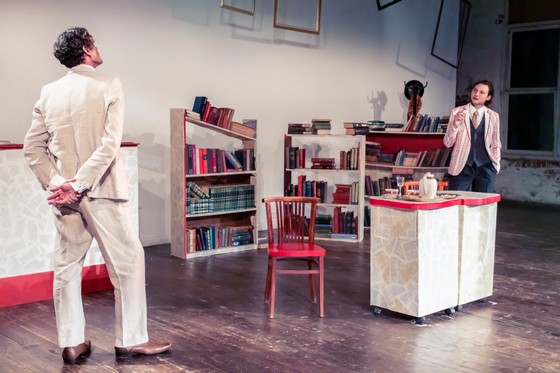 Star of the show is Dion Mills as the egotistical and irascible Henry Carr. Gabrielle Sing has impact in the second act, which she narrates.

Jordan Stack has created a most attractive and inviting set. Amazing what he’s achieved with a few props. Collectively, they capture the mood perfectly.

Travesties won’t suit all tastes – it will be just too zany for some – but those who admire left-of-centre thinking should revel in it. This literary slapstick is presented by Bloomsday in Melbourne, which annually celebrates the work of James Joyce around the day (16 June) on which his most famous work, Ulysses, is set. It’s now playing at fortyfivedownstairs, 45 Flinders Lane, Melbourne, in a season that finishes on 23 June 2019.