Planting little seeds of doubt is what the stranger does. The wellbeing of those she informs is of little concern to her, and there are many she intends to make aware of the duplicity of their loved ones. 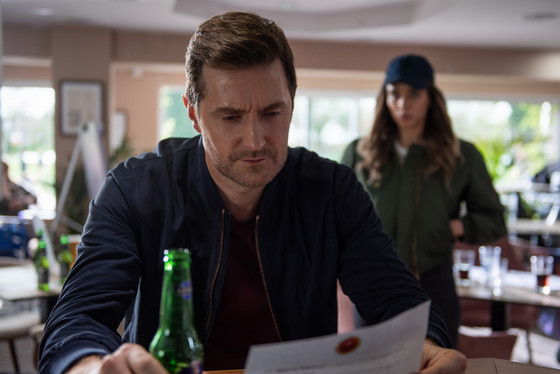 Up until the time of his brief encounter with a woman previously unknown to him, Adam Price has had no reason to question the structure of his life. A loyal wife, two kids, a decent job and a lovely home in a good area with friendly neighbours have all been his.  One conversation with a stranger tears it all down.

The knowledge that his wife pulled off an enormous deception some years ago leads Adam (the velvet voiced Richard Armitage) to confront Corrine (Dervla Kirwan) with unexpected results.  Corrine disappears, leaving Adam to lie to their two sons and the larger community about where the mother and well respected teacher has gone.

Bakery owner Heidi Doyle (Jennifer Saunders) experiences a late night carpark encounter with two strangers who have information about the ways a young woman can make cash from older men. In order to protect her daughter from a public shaming, Heidi intends to pay up to the two extortionists but a late night knock at the door introduces her to someone even more frightening.

A teenage forest party with plenty of hallucinogenics ends up with one child on life support, another with fractured flashbacks of being chased through the woods and a third with the head of an alpaca festering in his closet.  As the teenagers try to piece together what actually happened at the party, local police find evidence of discarded clothing at the party site and turn their attention to the local high schoolers.  With happy retirement plans in the back of her mind, Detective Johanna Griffin (Siobhan Finneran who has played a lot of TV cops but is most known for her role in Downton Abbey ) investigates with no intention of letting the local kids or their parents spin her a story about their supposed innocence.

Television shows featuring both the children and the adults racing around independently but with the same goal in mind are still having a moment thanks to Netflix. The Stranger is centred around the local high school where the missing Corrine works and in which the forest partygoers are seniors.  The viewer does want to put everyone in a room and clue them all up to being honest with each other, but of course that wouldn’t make for very fascinating television.

Likely a fair chunk of Harlan Coben’s fanbase would be streaming The Stranger.  The Stranger follows close on the heels of Safe and The Five, both of which were collaborative productions between Netflix, American thriller author Coben and RED Production Company.  Coben’s novels are set in the US and the Netflix series are all set in the UK, so there is that major deviation from the books.

The Stranger has the same visual aesthetic that Safe did, which is over bright daylight scenes of an upper middle-class English suburb inclusive of manicured back lawns, lovely homes owned by affluent professionals and crisply dressed children in the uniforms of their monied schools.  Manchester never looked so good.

The star quality of Armitage carries The Stranger with little of the script requiring him to kick up his acting much beyond the level of befuddled husband. The Stranger is full of actors you’ve enjoyed in other British works, and you might perhaps have spent a few seconds wondering about what they’ve been up to.

This is soapy television viewing for the main that dilutes what was once a well written thriller to the pace of daytime drama.  The Stranger is easy on the eye and from viewing the first few episodes, there’s a lot that needs to play out yet in order to make us truly worried.  We need to know sooner what Price intends to do in order to bring his wife safely home, and exactly how he will extract the truth from her once she’s back.

The Stranger is an eight part series, streaming now in its entirety on Netflix.