Recently busted back down to the rank of Constable, Mick Goodenough is the newest cop in town.  Once a detective always a detective though, and it’s impossible for the experienced investigator not to speak up when it appears that his new colleagues are ignoring the sinister signs of an escalating killer. The Night Whistler takes the reader back to 1960’s Moorabool, New South Wales. 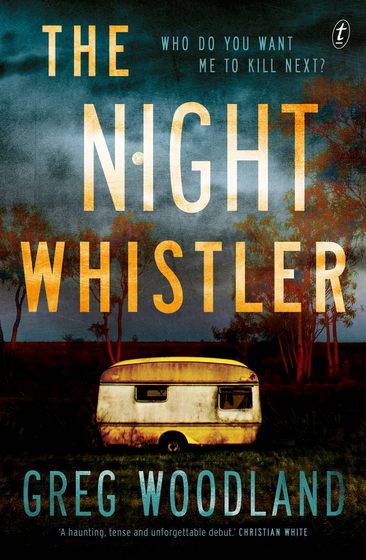 Mick soon discovers that the job of policing country Moorabool mostly involves managing domestic disturbances, investigating low level crimes, tolerating a little political argy bargy and attending to the petty grievances of those that live in the town and surrounds.  All pretty standard.  A pet killer may have largely slid by unnoticed in the past but to Mick who has worked more serious crimes in his recent career, red flags like these should never be ignored.

Hal Humphries and his family are also recent additions to Moorabool.  Having upped sticks for a new career opportunity, Hal’s father is doing his best to fit in into the rural community.  It’s not as easy for a stay at home mother or two small boys however to assimilate, and Hal isn’t oblivious to the increasing tension between his parents.  When Hal’s mother starts getting creepy late night phone calls on the nights that her husband is away, the Humphries only have one person willing to take them seriously – Probationary Constable Mick Goodenough.

The Night Whistler is one of those books that shows promise for future works.  If this was to be the first novel in a series, it would be good news.  There’s plenty of threading for a continuing series, and the narrative split between an adult (Mick) and child (Hal) gives both a resident’s view and a police view of the crime as it appears to both at their level of understanding.

It’s seems a bit odd to describe a crime novel as nostalgic and charming but in parts The Night Whistler achieves this, doling out the hokey language of 1960’s Australia which would seem contrived and blustering if coming out of the mouths of modern characters.  Set in less enlightened times, the novel does duck and weave around other issues such as gender inequality, racial intolerances, adultery and small town corruption.  None are delved into too deeply but these elements are all present, as you would expect.

The Night Whistler is an amiable read that in other times would perhaps be described as a good yarn. What it does particularly well is establish itself in a certain era where it is easy enough to imagine that rural policing did not involve a lot of sensitivity in its execution.  The bush descriptions evocatively bring forth the dust and the insects, bored local kids and disenchanted wives.  The Night Whistler isn’t afraid to go a little gorey in the kills, both human and animal, which does jar a little with how the rest of the novel is gently styled.

Kudos to the cover art designer – what could be creepier than an old vintage caravan abandoned in a country paddock?