It saddens me to have to return to the theme of lame Aussie movies. The Flip Side is yet another clunky example, with are equally clunky title. The script is thin, the action dull, some of the acting questionable and the direction rudderless. There are even pauses that should never be seen in a film. It felt like amateur hour or a throwback to a rather tortuous telemovie. 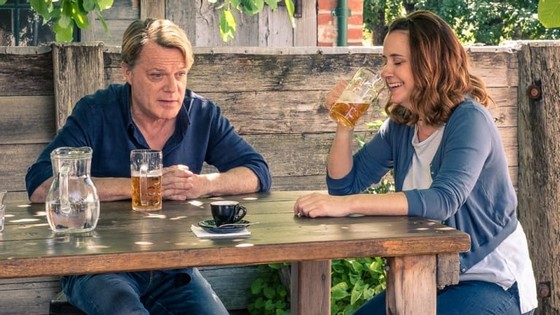 The Flip Side plays on the idea of clashing cultural backgrounds. That stemmed from writer and director Marion Pilowsky’s feeling of dislocation when she returned to Adelaide after decades living abroad. She wrote the script with her life partner Lee Sellars.

Ronnie (Emily Taheny) is a struggling Adelaide restaurateur. She looks after her elderly mother and lives with good-hearted boyfriend Jeff (Luke McKenzie). Five years earlier, while catering on a film set, she had an intense affair with British movie star, Henry (Eddie Izzard). Despite wild declarations of love, as the movie wrapped so did the relationship. Ronnie was crushed.

Now, when Henry’s French girlfriend Sophie (Vanessa Guide) calls to say they will be in Adelaide on a promotional tour. Jeff excitedly agrees to meet up – and unwittingly creates the perfect opportunity for Henry to seduce Ronnie all over again. The star-struck Jeff has no idea Ronnie and Henry were once an item. Suddenly, for a short while, the foursome are living in each other’s pockets.

The best and most natural performance came from Emily Taheny as the central character.

Save for a few funny moments, I struggled with The Flip Side. It hardly moved out of second gear. Where is the care factor?