Brilliant staging and puppetry mark the MTC’s Storm Boy; a theatrical adaptation of Colin Thiele’s 1964 novel of the same name. The book has also been turned into two feature films, one in 1976 and the other earlier this year. This version remains faithful to the original. 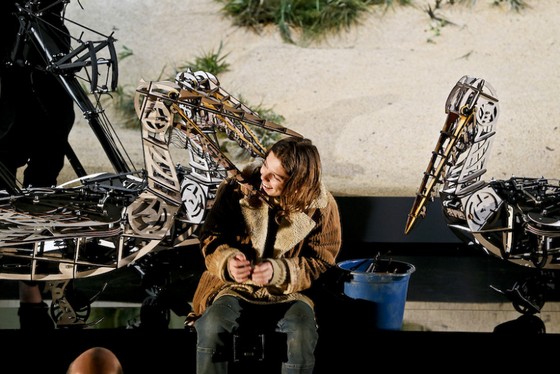 Youngster (Conor Lowe) lives in isolation in a shack by the sea with his reclusive father, Hideaway Tom (John Batchelor). They survive in a remote area on South Australia’s Coorong. Possessing a kind heart and a natural curiosity, the boy is keen to explore his surrounds, but his dad is paranoid about them being discovered for he fears the harsh realities of city life. On one such excursion after a fierce storm, the kid is discovered by an aboriginal man, Fingerbone Bill (Tony Briggs) – who, like him, has a love of nature and the varied birdlife in the area. At that first meeting between the pair, Fingerbone rescues the lad from a venomous snake and he is the one who gives him the nickname Storm Boy.

Although the father is far from pleased – positively venomous, in fact – that the boy is in the company of another, his antipathy thaws as he can see the indigenous Australian has no intention of revealing their whereabouts. After the dad reluctantly gives his son the go-ahead to explore their surrounds with Fingerbone, Storm Boy discovers a nest containing three abandoned baby pelicans. Fearing the worst, he implores Fingerbone and then his father that he be allowed to raise them, naming them Mr Proud, Mr Ponder and Mr Percival and he becomes particularly attached to the latter.

Storm Boy, the play, is a moving journey of friendship, fear and discovery. It is about love, loss and letting go. It has been beautifully realised by a talented cast, aided by the finest of work by three puppeteers who realise the wildlife in the area – penguins, a snake, pelicans and fish – through remarkably rendered plywood and aluminium puppets. The intricate puppets created by the extraordinary endeavours of Dead Puppet Society are the brainchild of puppet director and the associate director of Storm Boy, David Morton. The puppeteers on stage – Ellen Bailey, Emily Burton and Drew Wilson – also mimic the sounds of the birds.

The set design by Anna Cordingley and Kris Bird is a work in itself; transporting us to the Coorong. Photographic and video footage of the area adds to the realism. The projection designer is Justin Harrison.

I loved the performance Conor Lowe who makes his professional stage debut as the wide-eyed young boy with a deep-seated yearning to grow and experience more. It rang true. Tony Briggs brings a great sense of humanity and fun to his role as Fingerbone Bill. He is the teacher that Storm Boy needed. John Batchelor channels the deeply-rooted anger and fear in his character, Hideaway Tom.

Brilliantly adapted for the stage by Tom Holloway and directed by Sam Strong, this is a special piece of work – at once intimate and epic. Do not miss it.

Storm Boy is playing at Southbank Theatre, The Sumner until 20 July, 2019. I saw a preview performance.