A feel good Aussie comedy with dramatic undertones, Astroman really comes into its own in the second act.

Set in 1984, the play centres on a 13-year-old indigenous kid, Jiembra Djalu (Kamil Ellis), who loves video games. He and his sporty twin, Sonny (Calen Tassone), their 16-year-old sister Natalie (Tahlee Fereday) and mother Michelle (Elaine Crombie) have moved to Victoria’s biggest regional city, Geelong. Michelle won’t stand for any backchat and is determined to bring these kids up right. 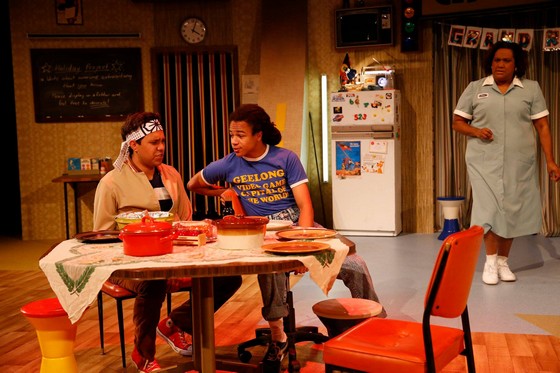 They were forced to move after an incident involving Jiembra in Townsville. His dad, an engineer, has remained up north for work. A good kid at heart, let’s just say Jiembra doesn’t always do the right thing. He has a bit of a rebellious streak. Local lad Mick Jones (Nicholas Denton) frequently bullies Jiembra and Sonny. That lands Jones in hot water with Greek widower Mr Pavlis (Tony Nikolakopoulos). He runs the local video game parlour, which the boys regularly frequent. Mr Pavlis is a kind-hearted man who has his own issues.

After an episode involving Jones, the brothers and a stolen bicycle, Mr Pavlis finds himself driving the twins home. Next thing you know, Jimebra is spending more time at the video arcade, now fixing the machines as well as playing them. Mr Pavlis becomes a mentor to Jiembra, whose high school teacher also recognises his abilities. It becomes a question of how to keep Jiembra on the straight and narrow and capitalise on his innate strengths.

Astroman is a grounded coming-of-age tale set in a time before political correctness, which unfolds with a lot of love and laughter. The first act establishes who’s who and what they are up to; while the second gives us closure, focusing on Jiembra putting himself in the position to realise his full potential.

Deft writing (think of the movie My Big Fat Greek Wedding) – including the smart one liners – by Albert Belz is the making of Astroman. All the characters are well realised.

I was particularly taken by Tony Nikolakopoulos, who displays vulnerability and strength in his portrayal of the Astrocade (as the games parlour is known) proprietor. His was the most nuanced performance … and with it we gained real insight into his suffering. Elaine Crombie’s portrayal of Michelle – with humorous interchanges and no-nonsense instructions – also strikes a chord. Incidentally, Crombie plays an outrageous second role as a video game competitor. Kamil Ellis’ live-wire showing as the central character is nothing to be sneezed at either. Tahlee Fereday, as his feisty sister, may not be asked to do as much, but she excels when called into action. 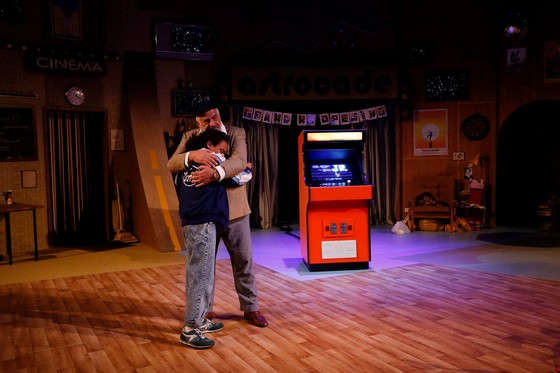 Whilst I felt not quite enough happened in the first act, I had no such concerns about the back half. Among much mirth, mucking-up and merriment, pain doesn’t lie far beneath the surface. Belz has done a fine job straddling both sides of the divide, while leaning towards humour.

The staging, too, aids the cause in recreating the era simply but effectively. The set and costume designer is Jonathon Oxlade.

The audience (on the night I attended) appreciated the production  … with good reason. Directed by Sarah Goodes, Astroman is playing at Fairfax Studio at Arts Centre Melbourne until 8 December 2018.

* I saw the second preview performance of the play.