Okay, this is a tough one. Shirley is out-there cinema for the dedicated cinephile. If you like a nice logical, linear plot with likeable characters, well, I’m afraid this isn’t for you. Director Jennifer Decker crafts an imagined portrait of the acclaimed writer Shirley Jackson that bathes in both the American Gothic that Jackson championed, and in surrealism. She works from a script by Sarah Gubbins (Better Things), which in turn adapts Susan Scarf Merrell’s novel of the same title. 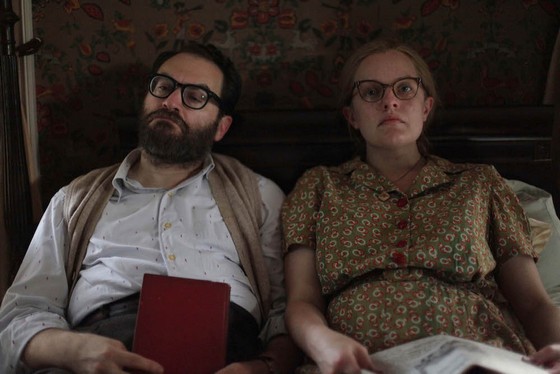 It’s 1964. Rose Nesmer (Odessa Young) and husband Fred (Logan Lerman) travel to Bennington, Vermont, home of the prestigious Bennington College. Fred has been accepted as an adjunct professor at the all-women’s college, under the supervision of Prof Stanley Hyman (Michael Stuhlbarg). Prof Hyman offers to put the newlyweds up for a few days in the home he shares with his wife, Shirley Jackson (Elisabeth Moss). Jackson is already a “name” writer thanks largely to her short story “The Lottery”; but has spiralled into the life of a recluse. She rarely even leaves the house, and her work has stalled, much to Stanley’s chagrin.

Although their stay is meant to be brief, Stanley imposes on the couple (Rose in particular) to stay on to help with Shirley’s care. While Stanley and Fred head off to the college each day, Rose has to remain with Shirley. But it seems the young woman’s presence inspires Shirley to begin work on a new novel, a work based on the real-life disappearance of a local girl.

A few things to note. Shirley and Stanley were real people – Rose and Fred are fictional characters. In real life, Shirley and Stanley had four children; but in the film, they seem to be childless. At one point in the film, Shirley declares the title for her new work will be Hangsaman. But the real Shirley published a novel with that title in 1951; some 13 years before the events in the film. So Shirley (the film) is both connected to, and disconnected from, the real person. As such, it can’t be biographical. It’s rather more interested in the psychology of Shirley and Rose as they navigate their fraught relationship.

What Decker does is paint a portrait of two women at different points in life, but facing similar problems. In doing so, it explores the mores of the time and extrapolates them out for a contemporary audience. It doesn’t take much to appreciate that women still face essentially the same issues (albeit perhaps in a different guise) today. Decker’s treatment of the dynamic between the two main characters reminded me of Olivier Assayas’ terrific The Clouds of Sils Maria (2014). Indeed, a crucial scene in Shirley mirrors one in Assayas’ film. DOP Sturla Brandth Grøvlen evocatively captures the film’s sweeping exteriors and claustrophobic interiors. And a special shout-out goes to Tamar-kali for a really remarkable musical score.

While Shirley is impressive, it’s also not perfect. In particular, it suffers from some problems in the second act with a number of scenes seemingly going nowhere. And a major “reveal” in the third act would surely be obvious to anyone paying any sort of attention in the first act.

Any flaws in the screenplay however are amply overcome by a bravura performance from Elisabeth Moss (The Invisible Man) in the title role. Her assured performance brings the acerbic but fragile Shirley vividly to life. Michael Stuhlbarg (The Shape of Water) is equally compelling in the less showy role of the manipulative Stanley. Australian Odessa Young (The Professor) makes the most of her opportunity in a prominent role as Rose. She matches acting chops with Moss and Stuhlbarg in an attention-grabbing performance. Logan Lerman (Fury) draws the short straw as the rather milquetoast Fred.

Shirley is a prototypical “not for everyone” film. Decker brings a determinedly art-house sensibility to the already-oblique source material. If that sounds like your cup of tea, then it’s well worth seeking out.