Teaming (arguably) the most successful director of all time with a story that plays on both the current obsession with gaming and pop culture nostalgia would seem to be a no-brainer. It has to be good, right? Well, kinda. Steven Spielberg’s Ready Player One is a visually stunning spectacle at times, but it’s no E.T.

It’s 2045. In the now-overcrowded city of Columbus, Ohio, teenager Wade Watts (Tye Sheridan) lives a pretty dire existence. He shares a ramshackle apartment (more a shipping container) with his aunt Alice (Susan Lynch) and her latest no-hoper boyfriend Rick (Ralph Ineson). To escape, Wade, like most everyone else, taps into a virtual reality game called OASIS. Its creator, the now-deceased James Halliday (Mark Rylance) ensured its popularity by embedding a quest into the game itself. Anyone who can find three hidden keys and unlock the game’s “Easter egg” will inherit the game and all Halliday’s considerable wealth. 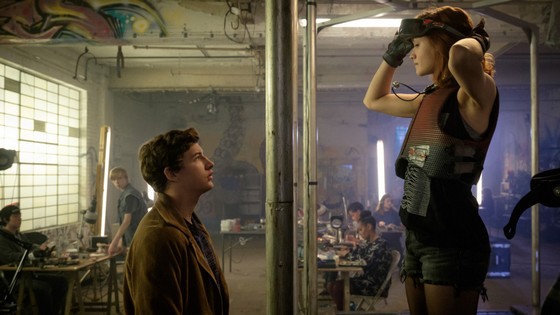 In the game, Wade (who goes by the handle Parzival) hangs with his best online friend, known as Aech. We later find out Aech is in fact Helen (Lena Waithe). Wade/Parzival also meets an avatar known as Art3mis and falls for her in VR. In real life, she’s Samantha (Olivia Cooke), an activist with an agenda. Meanwhile, Wade and his friends aren’t the only ones hoping to win the game. Head of tech firm International Online Innovation (IOI – geddit?) Nolan Sorrento (Ben Mendelssohn) wants to win the game and accrue Halliday’s massive holdings, thereby making IOI the most powerful firm on the planent. And Sorrento will be the most powerful man alive.

This is a high-concept film for sure, although it’s hard to see who’s going to embrace it. It’s nostalgic elements heavily reference the 1980s; but the now 40-something Gen-X’ers who fondly recall that era are probably unlikely to go for its “kids battle evil corporation” premise. (Yes, for those playing at home, this is a Scooby-Doo cartoon on a grand scale.) But teenagers who are immersed in gaming culture are probably unlikely to understand – much less care about – 80s cultural touchstones. Still, box office success is something Spielberg knows well, so you’d have to think he has faith it will find its audience.

Ready Player One displays that trademark Spielberg blend of humour, drama and sentimentality. Here that mix works fairly well, at least until the somewhat mawkish ending. The script however is bulky – particularly in the needlessly extended second act. Then again, when you consider this film follows the basic format of the Lord of the Rings movies (among many others), I guess it’s hardly surprising that it drags at times.

It has a lot (!) of pop culture references. Those old enough can try to pick them out, though there are so many, it’s probably impossible. Some are great (the Iron Giant!) while some are, well, Van Halen. And as might be expected, the plot had its fair share of holes. I also found its final message – pleading for people to be more connected with the real world – just the faintest bit hypocritical.

The cast are generally pretty good, though it’s a little hard to appreciate their efforts since they’re CGI-animated for at least half the film. The stand-out however is Mark Rylance as Halliday. He plays a very different character here from his usual (a la Bridge of Spies or Dunkirk) but pulls it off with panache. Tye Sheridan (X-Men Apocalypse) is likeable enough as Wade, though his character seems to get a bit “lost” at times. Olivia Cooke (Bates Motel) is much stronger as the feisty Samantha. Lena Waithe (Master of None) is sadly under-developed as Helen. T.J. Miller (Deadpool) provides much of the humour in the film, but we only ever hear him as the voice of avatar henchman I-R0k. Ben Mendelssohn follows up his baddie from Rogue One with a another suitably sneery turn as the smarmy Sorrento.

While I appreciated elements of Ready Player One, it’s safe to say I wasn’t part of its target audience. As a big-budget school holiday spectacle, it works. But if you start thinking too much about it, it doesn’t really hold together.