While gay marriage was recognised in the United States some time ago, it hasn’t led to an influx of mainstream gay-themed movies. They remain few and far between. Something like the excellent Academy Award winner Call Me by Your Name remains in the art house space. Love, Simon breaks the mould – an openly gay themed romantic comedy. It’s a coming-of-age tale between two high school kids of the same sex. 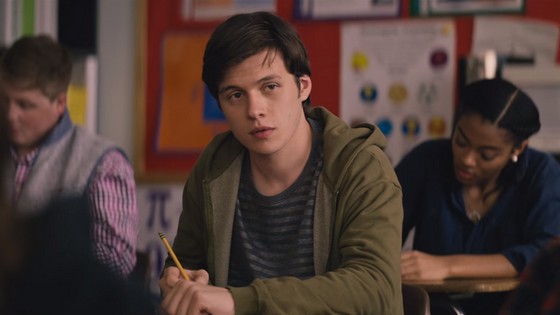 The plot revolves around 17-year old Simon Spier (Nick Robinson). He starts with an email flirtation with another closeted youngster, known simply as “Blue”. But when one of his emails falls into the wrong hands, Spier’s secret is at risk of going public. Martin (Logan Miller) – Simon’s socially awkward, yet overtly confident classmate – decides to blackmail him. Martin believes that with Simon’s help, he could get a date with the beautiful Abby Suso (Alexandra Shipp), but soon enough things get seriously out of hand and both Simon and Blue are compromised.

Love, Simon is largely sweet and nice, and features some lovely characters. It has charm and pizazz, and catchy dialogue. Having said that, it suffers from a dull start. It takes its time to work its way into our psyche.

Nick Robinson (The 5th Wave) is well cast as the earnest and sincere hero of the piece – a decent young bloke. Logan Miller (Scout’s Guide to the Zombie Apocalypse) does a fair job stealing the limelight as the loud-mouthed nerd Martin. But the best lines and delivery go to the drama teacher Ms Albright; a role filled by Natasha Rothwell (Insecure), whose sense of timing is impeccable. Not far behind is the cringe-worthy effort of the deputy principal Mr Worth, played by Tony Hale (The 15:17 to Paris).

Love, Simon could be accused of sugar coating the real-life experience of gay students (kids can be mighty cruel). But I dare say most who buy a ticket will still applaud the Hollywood ending.