Poms is a comedy in which senior citizens act like teenagers.

Martha (Diane Keaton) has cancer. So she sells up her belongings in the city and retreats to a sprawling retirement community where residents are promised the time of their lives for the rest of their lives. But Martha isn’t your typical resident – she just wants to be left alone. Mind you that isn’t about to happen when her new home is next door to a neighbour, Sheryl (Jackie Weaver), who is her polar opposite. Where Martha is withdrawn, Sheryl is irrepressible. Martha’s quest for peace and quiet is upended by Sheryl’s partying ways. And forget Martha’s loner status. Sheryl will stop at nothing to ensure they become instant best pals. 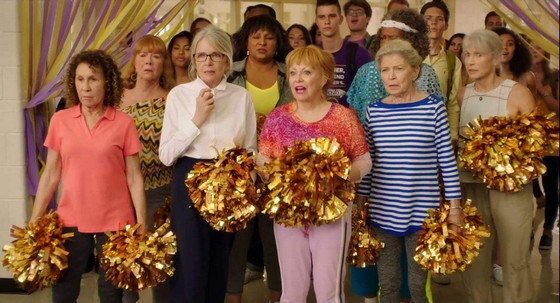 Their friendship finally cemented, Martha comes out of her shell, confiding in Sheryl that she was once a cheerleader, but life got in the way and she never got the chance to perform. That leads to a life-changing decision to form a cheerleading club. Martha and Sheryl hold auditions, where they are introduced to the “talents” of their fellow seniors, including Olive (Pam Grier) and Alice (Rhea Perlman). In total there are eight ladies who have come together, despite their various conditions (sciatica, knee replacements, dizziness, aching muscles and more). But not all inside and outside the retirement community are keen on the idea of elderly cheerleaders. Some – old and young – would like to see them fail.

Poms is the first-time feature film from director and screenwriter Zara Hayes. Her co-writer is Shane Atkinson (also a newcomer to feature films); and doesn’t the novice tag stick out like a sore thumb! What were the filmmakers’ thinking? That older cinema patrons are not worthy of more intelligent and entertaining material? Well, that’s certainly what it seemed like to me. The most embarrassing, mealy mouthed movie of the year thus far, decent actors can’t save an obvious, saccharine-sweet script.

I reckon school kids could come up with a more sophisticated story. Any sense of plausibility is lacking … and in large part it’s decidedly unfunny. Rather, consistently cringe-worthy. I so desperately wanted to walk out from about 10 minutes in. I couldn’t get out of my head that I was watching luminaries like Diane Keaton and Australia’s own Jackie Weaver trying their hardest to extract some form of life from a screenplay built on platitudes. I’m not casting stones at them for their acting, only for actually choosing to participate in this blancmange.

As for those backing them up – the other elderly Pom Pom girls – they were merely given the odd line here or there and, on occasions, not even that, just an expression. Why? They are better than that. Perhaps it was about attaching names to this production to help attract an audience. My take on it – don’t fall for that dog and pony show. Poms is one to be avoided at all costs.