On the anniversary of the Romulan supernova event Jean-Luc Picard consents to be interviewed at his home, anticipating an opportunity to rationally discuss what was learned from mistakes made during the handling of the galactic catastrophe.  Of course, the reporter sent to Chateau Picard is not interested in this path at all, and instead pursues a directive to prompt the reclusive Picard into reacting to claims that it is the retired Admiral who is long overdue at explaining his own decisions. 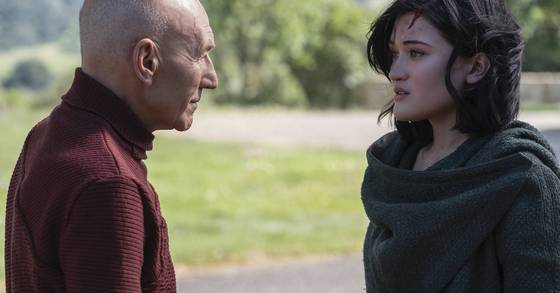 Dreaming repeatedly of his great friend and colleague, Lieutenant Commander Data (Brett Spiner), Picard is reminded anew of his deep connection with the android who rose rapidly in the ranks alongside Picard in Star Fleet.  In the present day, the production of synthetics is banned, in response to their uprising which resulted in the deaths of many Romulans and those living in the Mars colonies at the time of the supernova.

Attacked in her apartment as her boyfriend is killed in front of her eyes, Dahj (Isa Briones) finds herself responding combatively with skills that she never knew she possessed.  In the bloody aftermath, Dahj repeatedly sees the image of a man flash across her mind and responds to the urge to seek him out.  It appears Dahj has been ‘activated’, and though Picard has no clue at first how the two of them are connected, his dreams of Data soon direct him to determining the link.

(Up front disclaimer, this review is written by a Gen X’er who landed on Star Trek long after Shatner and only glanced upon Patrick Stewart in Star Trek: The Next Generation, via shared screentime with a Boomer partner who liked to watch just a bit of ALL the spin offs).

We’re only one episode in at the time of writing this review, so that’s enough of a show summary for now. Plot threads aplenty are woven throughout this first outing so things are looking intriguing for the remaining episodes that are yet to drop.

If you can’t recall the supernova popping up in any of the Star Trek TV incarnations, that is because it appeared instead in the 2009 J.J. Abrams directed Star Trek movie, when 900 million Romulan citizens needed to skedaddle the hell out of Dodge.  There’s also a bit of time travel involved in the ‘alternate’ timeline but lets not go too deep, as the Trekkian labyrinth is not a place to be casually visited.

Where it is the intellect of a character being called upon to do the heavy lifting, rather than his physicality, you need to be utterly convinced that this is someone who has form in that regard.  Patrick Stewart of course does, bringing the necessary gravitas to yet another TV production set in the Star Trek universe.  Stewart gracing the small screen as Picard once again is almost the treat we never dared hope for, and it is immensely satisfying to experience his elegant delivery once again.

This show will succeed or fail on the basis of Stewart’s performance of course, regardless of how complex and entertaining its plot but lets consider what else Picard is promising.

Episode one rides high on some terrific action where Dahj is under attack. As with all the best fight sequences, the eye has nowhere to rest and a pause at any point results in a seamless continuation of the motion. The chateaux scenes, overlooking rows and rows of vines, are filmed in a warm nostalgic hue that makes a pointed contrast to when Picard is away from his idyllic home.  He has a safe place to return to, though the world has largely moved on from all that the Admiral had achieved in his career.

The secondary characters in Picard are mostly new to our viewing eyes as far as the Star Trek universe goes, though you will have seen some of them in other productions very recently.  Alison Pill plays genetic scientist Dr Maddox who is trying to keep alive synthetic research and Harry Treadaway (The Crown, Mr Mercedes) plays Narke, a Romulan agent.

If you enjoy a little speculative insight as to how we all might be living in the future, Picard peppers us with those suggestions eg the creation (think 3d printer style) of Picard’s hot beverage, including the ceramic cup that contains it, which is marvellous to watch.

Picard is the Star Trek for this particular time in pop culture, and it hard to think of a character better suited to bring it forward to a new generation who may not have grown up absorbing the lore.  The first episode does suffer a little with overstuffing, to get us all up to speed, however there’s heart pangs aplenty whenever Data pops up, and whenever Picard grasps the hands of his new young charge or simply opens his mouth (that Shakespearean trained voice does the trick every time) regardless of where you sit on the Star Trek fan spectrum, if at all.