The phrase “a Kevin Hart comedy” is oxymoronic. Hart is one of the unfunniest comics making movies in Hollywood, and his grating, shrill, over the top and unsubtle shtick wears thin very fast. At the preview of his latest effort Night School, we were told Hart’s films have grossed something like $124 million at the Australian box office. But two of the highest grossing films were Jumanji: Welcome to the Jungle and Central Intelligence. Both starred Dwayne Johnson, who is the biggest box office draw on the planet, and I suspect that most people went to see them because of him rather than Hart. The third big grossing film was The Secret Life of Pets. Clever animated films featuring cute animals always do well, especially during school holiday periods. When headlining his own films, the star leaves a lot to be desired, and comedies like The Wedding Ringer have been mediocre at best.

This laboured and painfully unfunny dud is yet another example of Hart targeting the lowest common denominator with his brand of humour. His latest film taps into the back to school genre that was mined successfully by Rodney Dangerfield thirty years ago and less successfully by Melissa McCarthy in the recent misfire Life of the Party. 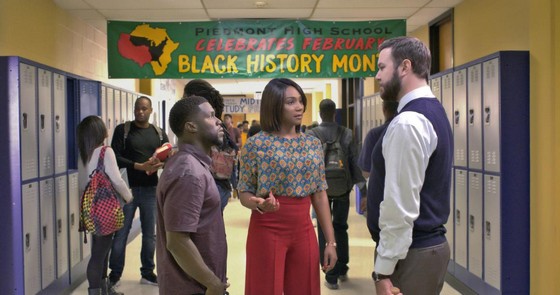 Hart plays Teddy Walker, a high school drop out who has managed to make something of himself thanks to a glib tongue and an overconfidence and chutzpah. He thinks he has a good life because he drives a flash car, has been repeatedly named salesman of the month the barbecue store he works for, and has a beautiful, successful, wealthy and patient girlfriend in Lisa (Megalyn Echikunwoke). But his house of cards is about to come tumbling down around him.

When he accidentally blows up the barbecue store Teddy finds himself unemployed and unable to land another job because he failed to get his GED at high school. The quick-thinking Teddy reluctantly returns to Piedmont, his former high school, in the hopes of reaching a solution with the school’s principal. However, his former tormentor from school Stewart (Taran Kilam) is now the principal, and is a baseball wielding tyrant who refuses to cut corners for Teddy. Teddy enrols in night school. He instantly clashes with his teacher Carrie (Tiffany Haddish, the breakout star from Girls Trip) who takes an instant dislike to the motormouthed Teddy suspecting that he will take shortcuts rather than put in the hard work required to pass the course.

Teddy’s classmates are a mixed bag. They include dowdy housewife Theresa (Mary Lynn Rajskub, from The Girlfriend Experience) who would rather be in class than at home with her bogan husband and unruly kids; the oafish Big Mac (Rob Riggle) as a father with a point to prove; garrulous conspiracy theory nut Jay (Romany Malco); a bored and self-absorbed teen princess (Anne Winters, from 13 Reasons Why); Luis (Al Madrigal), the immigrant waiter who Teddy caused to be fired after an incident in a fancy restaurant; and Bobby (rapper Fat Joe), a prisoner who attends class via Skype. Many of the scenes in the class room seem improvised and have a looseness about them.

When Carrie diagnoses Teddy as suffering from dyslexia (“learning herpes” as he calls it) and dyscalculia, his life begins to turn around. The film probably has a positive message about second chances and the value of education and the importance of caring teachers, but it gets lost in the jumbled mess of a script.

Hart has cobbled the lazy script together with five other writers, including regular collaborators Harry Ratchford and Joey Wells (Ballers); first time feature film writer Matthew Kellard; Nicholas Stoller, a veteran who specialises in more raunchy comedies like Forgetting Sarah Marshall; and John Hamburg (Little Fockers), which accounts for the episodic nature and hit and miss quality of the material. Given the pedigree of some of the writers Night School should have been much funnier than it is.

Unfortunately, much of the humour here falls flat and many scenes fail to deliver a killer pay off. For instance, a scene in which the students break into the principal’s office to steal a copy of the upcoming test so they can be better prepared is far too long and unfunny. And there are no consequences for their actions either. And that’s one of the problems with Night School – at 110 minutes it is far too long and runs out of steam and inspiration too often.

The ham-fisted direction from Malcolm D Lee (the raucous Girls Trip) doesn’t help either. Haddish has a bold and brassy screen presence with plenty of sassy attitude, but her role here is largely thankless and she plays second fiddle to Hart. Riggle plays to type as the simple-minded doofus. Even more embarrassing though is an early prologue scene in which the old Hart plays an unconvincing 17-year old version of Teddy. Most of the characters come across as caricatures rather than fully fleshed out three-dimensional people.

I sacrificed several brain cells watching this rubbish so you didn’t have to. Undoubtedly there are many Hart fans out there who will appreciate Night School, but otherwise this film has little appeal.