What started out as cringe-worthy fare became anything but as laughter, hijinks and a cute and savvy youngster’s performance took over and carried the day. Written by Erich and Jon Hoeber (who together wrote RED) and directed by Peter Segal (Second Act), it became a most enjoyable spy spoof. A lot has to do with the characterisations and the way they were pulled off. Dave Bautista plays a hardened covert operative who finds himself outmanoeuvred by a precocious youngster in My Spy. 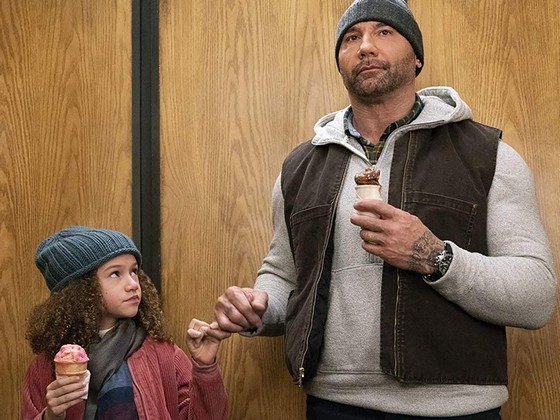 When CIA field agent Jason Jones – JJ to his friends – is demoted to a surveillance detail, he finds himself at the mercy of a sweet but determined nine-year-old girl, Sophie (Chloe Coleman). First up, she uses her tech savviness and street smarts to find JJ’s undercover hideout … near the apartment she shares with her single mother Kate (Parisa Fitz-Henley).

In exchange for not blowing JJ’s cover, Sophie convinces him to spend time with her and teach her to be a spy. Despite his reluctance to do so, JJ finds he is no match for Sophie’s disarming charm, intelligence and aptitude for espionage.

I have already mentioned the person who I saw as the real star of the show – a bright and manipulative youngster, as portrayed by Coleman. She is up there with Macaulay Culkin in Home Alone … and that is high praise indeed.

Dave Bautista is another one of these super brawny actors who doesn’t have the charisma of The Rock, but can still perform when given the right material … as he has here. Another example of that is John Cena, the lead performer in the recently released Playing with Fire. Put simply, they look wooden and out of place on a film set and the whole idea is to exploit that, which both My Spy and Playing with Fire do.

Kristen Schaal is well cast as the dweeby fan girl and Batista’s new partner, Bobbi, who plays up her adoration of the big man. She has a strong comedic repertoire. Parisa Fitz-Henley seamlessly fills the role of Sophie’s affable mum and ER nurse, who takes a shine to JJ.

While Ken Jeong doesn’t play his usual totally off the wall character, his deprecating humour still suits his persona as CIA bureau chief David Kim. Suffice to say, as the film reaches its climax there is even a surprise that I didn’t see coming.

So, My Spy ends up delivering a largely enjoyable and fun, over-the-top cinematic experience replete with laughs, romance, gunfire and explosions. What more could you ask for? Rated PG.