Writer and director Jonah Hill pulls no punches in Mid90s; a coming of age story about a 13-year-old skateboard enthusiast. 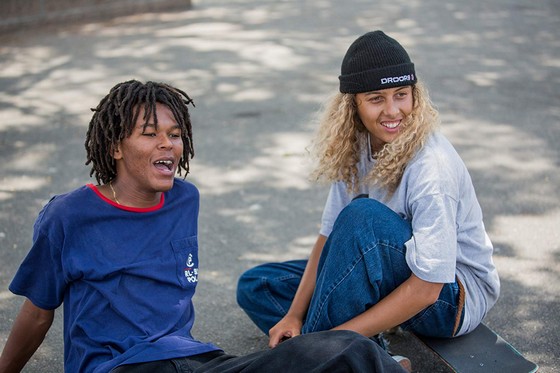 Hill himself grew up skateboarding in LA in the mid ‘90s, but he maintains the movie is not autobiographical, even though some of the imagery in the film is just as it was back in his day. As Hill sees it, it’s an “animal kingdom” movie about a young cub going in and learning to survive and build himself within a pack.

Quite frankly given what the youngster, Stevie (Sunny Suljic) goes through it is amazing he is still with us. His wide-eyed innocence is quickly taken away from him as he looks for and befriends the in-crowd. They are a bunch of skateboarders of varying ages, but inevitably older and taller than him. They hang out, talk air-headed drivel, drink, do drugs, go to parties, have sex and generally do what youngsters do. The 13-year-old is readily corrupted … and yet remains a good guy in spite of it all.

The way Jonah Hill presents it, Mid90s is fun and stupid, risky and dangerous, all at the same time. For Stevie it is exciting and a break from the constant haranguing from his older brother, Ian (Lucas Hedges) – a loner who takes every opportunity to seriously beat up on his younger sibling. Their single mother, Dabney (Katherine Waterston) – who has had a colourful past – cares, but seems powerless to control either of them.

I liked the diverse character traits given to the five members of the skaters’ inner sanctum and I include Stevie amongst them. There is a pecking order, but what they have in common is their love for the board and the tricks you can do with it. The actors playing them do a decent job too, led by the baby-faced Suljic who happens to be a professional skater. I also took a shining to the dreadlocked Ray (Na-kel Smith), who wasn’t averse to dishing out some homespun wisdom.

Mid90s is tough and gritty and marks an auspicious behind-the-camera debut for Jonah Hill. It is a film you need to stick with to get the most out of.