Or, Living With Your Self. Netflix’s new dramedy starring Paul Rudd is a small masterpiece about the petty cruelties of everyday life. And while some might expect more from its high-concept premise, the show’s quotidian concerns offer enough to make it worth sticking with. 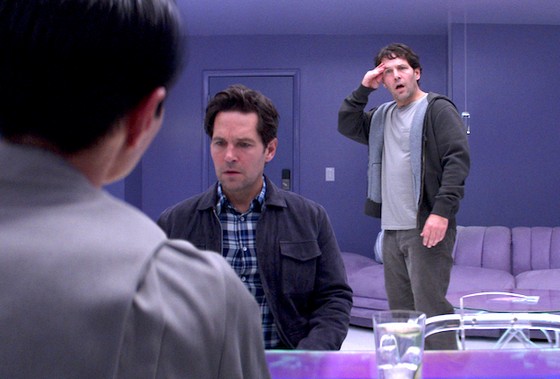 Miles Elliot (Rudd) is stuck in a rut. His job in a marketing firm is going nowhere – a product no doubt of his crashing lack of interest in it. Colleague Dan (Desmin Borges) is ready to pounce on Miles’ slip-ups and advance his own career. At home, things are no better. His wife Kate (Aisling Bea) is distant and seems to be constantly disappointed in Miles. But then he gets a tip (from an NFL quarterback, no less) about a “spa” that offers remarkable results in rejuvenating body and mind. Intrigued, Miles drives to the “spa” – located in a seedy strip mall – and asks the owners Jung-Ho (James Seol) and Left (Rob Yang) about the process. Soon a deal is struck and Miles is readied for his transformation.

The next thing he knows, Miles wakes up in a shallow grave. He digs his way out, and sets off on the arduous journey home. When he gets there though, he’s stunned to discover a man who looks exactly like him, New Miles (also Rudd), is living in his house. After the initial shock wears off and the Mileses reach an uneasy truce, they head back to the “spa”. There they discover that New Miles is a clone of Miles – an exact replica with the same body and all Miles’ actual memories implanted. Thing is though, the “old” Miles is supposed to be dead (hence the grave); but the “cheap gas” was ineffective. Now Miles and New Miles have to negotiate the world as two identical beings. The rub for “old” Miles though is that New Miles is so much better at everything than he is.

While the cloning angle is cute, Living With Yourself isn’t a sci-fi show like, say, Black Mirror. It is however a distant cousin to the terrific Netflix series Maniac; in that the sci-fi elements are secondary to a more universal concern. In Maniac, it was dealing with trauma. Here, it’s dealing with insecurity. As a result, Living With Yourself is much more concerned with relationships – specifically those between Miles and Kate; and between Miles and his other self. Other relationships emerge later in the series, but discussing them would involve spoilers.

Paul Rudd’s affable charm translate effectively from the big screen (Ant-Man and the Wasp) to the small. He’s got one of those faces that draws audiences in and gets them on his side. Of course, here he has two different “sides”. Irish actor Aisling Bea (The Fall) provides a rather harder edge as the practical Kate, but still elicits empathy for the character. Desmin Borges – so good in You’re the Worst – has a more thankless task here as the prickly Dan.

The combination of the fine performances, kooky concept and clever scriptwriting make Living With Yourself a great option if you’re after something a bit out of the ordinary. At the moment, there’s no word on whether season 2 is on the cards or not. So enjoy the confined 8-episode (each only about 30 mins long) season 1 for what it is. You never know – unlike Miles, you might not get a second chance!