One of the brightest talents in television creates one of the most audacious series of the year with Maniac. That talent is Cory Joji Fukunaga, the mind behind the acclaimed first season of True Detective, has crafted an exquisitely mind-bending experience. Of course, it helps to have A-list actors Emma Stone and Jonah Hill in the lead roles; but this is arguably Fukunaga’s finest work to date. 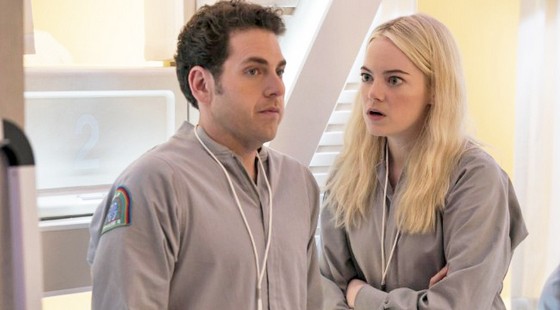 At its heart, Maniac (for all its sci-fi trappings) is a story of human connection. The two protagonists – Owen (Hill) and Annie (Stone) – are strangers. Each is disconnected from their families and possibly their own lives, for reasons explained in episodes 1 and 2. They separately sign up for a phermaceutical trial, one that promises a new way of dealing with life’s problems. In the coolly sterile environment of the testing lab, they pair find a connection with each other, under the influence of the drugs. This however is not supposed to happen. Trial supervisor Dr Azumi Fujita (Sonoya Mizuno) reaches out to Dr James Mantleray (Justin Theroux). Mantleray participated in the original design of the drugs and the trial but left for shadowy reasons. Now he and Fujita have to get things back on track.

This is however a heavily simplified outline. So much happens in each episode, it’s virtually impossible to recite it all. This of course is part of Maniac’s charm.

Fukunaga takes the viewer on a wild ride. Each episode is a unique, finely crafted gem. I watched episode 2 (“Windmills”), and thought it was one of the most brilliant pieces of television of the year. That was till I came to episode 4 (“Furs by Sebastian”). That has to be seen to be believed.

Maniac is ideal for bingeing; but really needs to be seen in order. Don’t jump ahead because things happen in the parallel story lines that you need to know. It’s an example of the change streaming has brought to narrative media. It used to be that TV was seen as the “short form” and movies as the “long form”. That’s now flipped and series like Maniac represent some of the best long-form storytelling.

Fukunaga also plays around with TV conventions. Like not making each episode the same length. Each one is as long as required to play out its narrative; whether that’s 25 minutes or 45 minutes.

Oscar winner Emma Stone (La La Land) brings her A-game as Annie. The series gives her plenty of opportunities to show her range, and she obliges with a set of stunning performances showcasing both her comedic and dramatic chops. Jonah Hill (Don’t Worry, He Won’t Get Far on Foot) is a perfect foil as the neurotic Owen. Sonoya Mizuno brings a quirky edge to the icily efficient Fujita; while Justin Theroux gives Mantleray a dishevelled charm. Look out for Sally Field, who appears as Mantleray’s damanding mother.

In a year with a stack of great television, Maniac is destined to be a standout. This series delivers the unexpected, the unusual and the profound. It’s simply one of the best.

Maniac is now streaming on Netflix.