There’s a great deal to enjoy about IT, and enough scares to keep all but die-hard horror fans satiated. Forget those funny clowns you may have seen at the circus as a kid, the red nosed star of the piece here, known as Pennywise, is one devious and nasty dude. 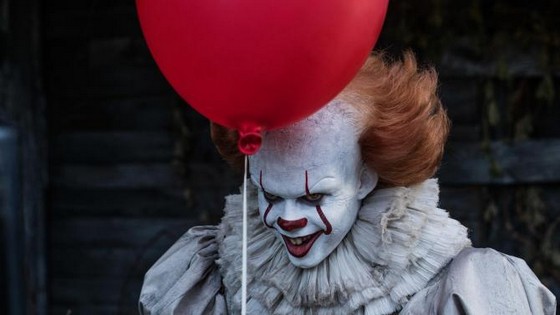 The film, directed by Andy Muschietti (Mama), is based on the popular Stephen King novel of the same name. The Pennywise character is modelled on real life serial killer John Wayne Gacy, who was known as The Clown Killer. There was also a 1990 TV mini-series that starred Tim Curry.

The movie tells the story of seven young outcasts – around the age of 13 – growing up in the township of Derry, Maine. They call themselves “the Losers’ Club”. Each of them has been ostracised for one reason or another and they’re targeted by a local pack of bullies. They have all seen their inner fears come to life in the form of an ancient shape-shifting predator they can only call “It”.

For as long as their town has existed, Derry has been the entity’s hunting ground, emerging from the sewers every 27 years to feed on the terrors of its chosen prey: Derry’s children. Banding together over summer break, the Losers form a close bond to help them to overcome their individual dreads and stop a new killing cycle.

That cycle began on a particularly rainy day. A small boy chased a paper boat down a storm drain … and into the hands of this nefarious clown. That boy was the younger brother of the stuttering “head” of the outcasts, Bill Denbrough (Jaeden Liberher).

Most importantly the dynamic between the children works a treat. There is a growing awareness among the adolescent boys of Beverly Marsh (Sophia Lillis), an attractive, feisty girl in their midst. First up, she is friendly to Ben Hanscome (Jeremy Ray Taylor) who is immediately besotted. Then she gravitates towards Bill.

Lillis was terrific in the role, displaying a natural gregariousness, spunk and humour. Taylor was also a revelation as the nerdy lad with heart. The clown – a role filled by Bill Skarsgård (Allegiant) – and the other terrors are, indeed, frightening on occasions. Skarsgård is suitably creepy in his representation.

The filmmakers have done a fine job building the tension and creating a mood of discomfort throughout much of the piece, aided by the music. However, IT didn’t need to be two and a quarter hours long. Some prudent pruning would only have served to enhance an otherwise very good product.

In adapting the screenplay, the filmmakers decided to position the action in the time frame they knew and grew up in. So although Stephen King set the first part of his novel in the 1950s, that has now been moved to the ‘80s. The portent of terror is not only the appearance of the clown, but often just a single red balloon, an important facet of Pennywise’s iconography. The IT universe has begun. Watch out for part 2. Rated MA, it scores a 7½ out of 10.