Ideal Home showcases the talents of Steve Coogan (The Trip to Spain) and Paul Rudd (Ant-Man). While bawdy, it proves to be a sometimes surprisingly touching comedic-drama. 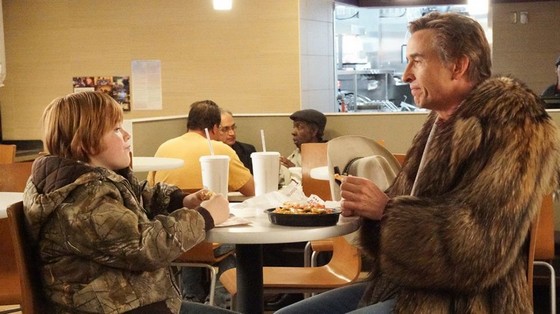 Colourful celebrity chef Erasmus (Coogan) and his partner Paul (Rudd) have a happy and rather self-indulgent life together. They live in a glorious home in Santa Fe. Erasmus stars in a cooking show on cable TV, which Paul produces. A self-absorbed prima donna, Erasmus always has to have the last word. As a result, he’s constantly rubbing Paul the wrong way. Their bickering is incessant and yet the pair have a deep and heart-felt connection.

They frequently throw ostentatious dinner parties for their friends. Out of the blue, their almost perfect existence is turned upside down when, at just such a party, Erasmus is confronted by the grandson, Bill (Jack Gore), he never knew he had. With the child’s drug dealer father (Erasmus’ son) jailed, it seems Bill has nowhere else to go. Erasmus, though, is hardly parent material. With changes and challenges for Erasmus, Paul and Bill, this could be a recipe for disaster.

Coogan plays flouncy, irreverent and haughty so well. He’s a smart man who knows just which buttons to press to milk a role and then some. With the exception of a few break-outs, Rudd is the straight man. Jack Gore isn’t required to do all that much, save for one scene, but still has impact.

The premise is as outrageous as its execution, but somehow it largely works. Much of that has to do with the charm infused into the material, which is ever so carefully manipulated for maximum impact. I must add the thoroughly gorgeous settings don’t hurt either. Alexander Gruszynski’s cinematography is memorable.

Knowing nothing about Ideal Home before viewing it, I was somewhat blindsided … and I have to say, entertained. This is feel-good material with some laughs and a bit of syrup.