Toni Collette puts in a dominant performance in the dramatic thriller Hereditary.

When the matriarch of the Graham family passes away, her daughter Annie’s (Collette) life begins to unravel. Their relationship was always prickly, and they were estranged for an extended period. Now cryptic and increasingly terrifying secrets about the family’s ancestry will come to the fore. Everyone associated with Annie is in danger as she tries to deal with a sinister fate. 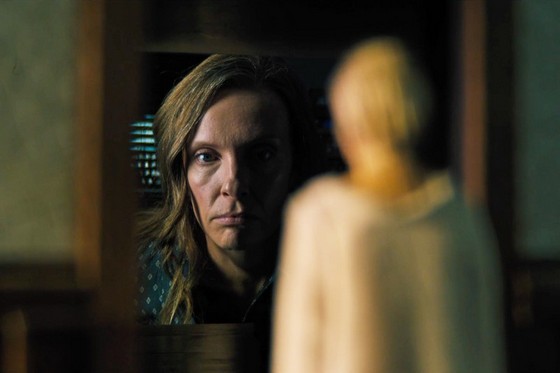 Hereditary is the story of a family battling malevolent forces that seek to colonise its bloodline. It was loosely inspired by first time feature film writer and director Ari Aster’s own experience with tragedy and grief. A prolonged succession of misfortunes came to resemble a curse. The picture marks a promising debut for Aster. He previously wrote and directed a series of shorts centred on domestic rituals and trauma.

Nothing happens quickly in a slow build-up to the climax. There are few jump-out-of-your-seat moments, although there are a number of shocks and surprises. The events depicted become ever more disquieting.

Most of the action pivots around Annie who, we find out, has always had issues. But now they’ve gotten out of hand. From the outset, you’re in no doubt there’s something decidedly different about Annie’s 13-year-old daughter Charlie (Molly Shapiro). She’s odd and has a strong connection with her maternal grandmother.

Alex Wolff plays older brother Peter but, to me, he appeared restrained. And father Steve (Gabriel Byrne) clearly took a back seat to Collette. His was a significantly less showy role.

There were times when I wanted the narrative to move faster; and other occasions when the whole thing just felt silly. Still, I admired the Hereditary’s depiction of a family descending into a dark place. In the end, I was trying to pick the moment when Annie’s future was sealed. Was it at birth? Did it come with the death of her mother? Or was it with the appearance of a fellow “griever”, Joan (Ann Dowd)? You be the judge.