If there’s one thing Hollywood loves to celebrate, it’s the artistic process. Doing that is fairly easy with things like theatre (see: Birdman) or movies themselves. Painting however is a rather different proposition. Since it’s a largely internal process, it doesn’t really lend itself to the visual medium. That hasn’t stopped actor-turned-director Stanley Tucci from making a pretty a good fist of doing so in Final Portrait. 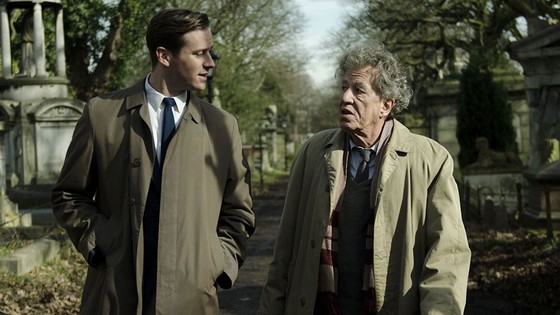 This delicate film delves into the life and work of Alberto Giacometti. The Swiss painter and sculptor is a big name in the art world, though not as recognisable as his contemporaries like Picasso and Pollock. Tucci explores two parallel themes – Giacometti’s tangled private life, and his artistic method. To do so, he introduces the (real) American writer (and Giacometti biographer) James Lord. The portrait of the title is also real, and was on the auction market as recently as 2015.

It’s Paris in the 1960s when Giacometti (Geoffrey Rush) invites Lord (Armie Hammer) to sit for a portrait. Already a fan of the artist, Lord quickly agrees. He dutifully turns up at Giacometti’s apartment and attached ramshackle studio. Giacometti shares the space with his wife Annette (Sylvie Testud) and brother Diego (Tony Shaloub), who works as his assistant. Lord however comes to discover that there’s a fourth member of this household. The artist is obsessed with a prostitute named Caroline (Clémence Poésy) who serves as model and muse. Despite a promise to keep the sitting to “a day or two”, the appointment drags on. This is due mainly to Giacometti’s erratic behaviour, fuelled equally by alcohol and self-doubt. It seems as though Giacometti may be reaching out to Lord for help; even if he doesn’t know what help he wants.

As well as directing, Tucci wrote the screenplay. He spends a lot of time fleshing out the main characters, particularly Giacometti and Lord. Tucci however lavishes more limited attention on the women in the piece. While Annette is at least given some intriguing scenes, we never learn very much about Caroline. The same though can also be said for Diego. Final Portrait’s main problem however is its enigmatic – if not downright deflating – ending. Not so much a diminuendo as a fall off a cliff, it’s almost as if Tucci ran out of ideas.

Luckily though, what goes before is interesting enough to sustain the film’s modest 90 minutes running time. Like his subject, Tucci manages to paint a compelling portrait of a fascinating character. He deftly captures both Giacometti’s meticulous working style, and his volatile personality. Geoffrey Rush, of course, helps that immensely with yet another impressive performance.

Armie Hammer, once touted as an action star, makes the latest in a series of bold choices by playing Lord. He’s becoming perhaps the male equivalent of Kristen Stewart. The role is largely thankless (i.e. to be a sounding board for Giacometti’s fervour) but Hammer does some excellent things with it. Sylvie Testud is excellent as Annette, despite her limited opportunities. Clémence Poésy and Tony Shaloub draw the short straws and while both are fine, neither make a lasting impression.

Final Portrait is a film of nuance and subtlety. The joy of the film is in its fine details – much like looking at a Giacometti painting. As such, it makes demands on the audience. While Tucci perhaps falls short with the film’s ending, there’s plenty here to enjoy if you’re willing to seek it out.