Six strangers are brought together in an escape room challenge and have to use their wits when the game turns lethal in this hybrid horror/survival-thriller. It’s a bit like Saw, but without the torture. 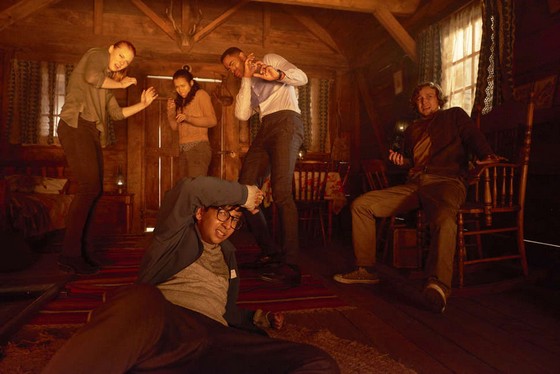 Six strangers – who seemingly have nothing in common – each receive a mysterious cube. When they manage to open it, they find an invitation to a high intensity escape room experience near the Chicago docks. The six are: Zoey (Taylor Russell), a reserved but smart college student; Ben (Logan Miller), a slacker and chronic underachiever who stacks shelves in a convenience store; Amanda (Deborah Ann Woll), a veteran who still bears the scars of her combat experience; Danny (Nik Dojani) a geek and escape room enthusiast; Jason (Jay Ellis), a smooth, slick but arrogant businessman; and Mike (Tyler Labine), a truck driver who’s considerably older than the rest.

The six meet in a lavishly appointed waiting room. They browse through magazines and chat until the room begins to turn into an oven. They desperately try to uncover the clues that will lead them to the key to unlock the room. Once they get out, they they face other rooms which become increasingly more deadly. There’s a wilderness room, a rustic log cabin, an inverted billiards room and bar (shades of the classic The Poseidon Adventure), and even a hospital ward. Each room has been carefully designed to tap into the fears of each of the players. It’s a race against time, and $10,000 prize money awaits the survivor. The six soon discover that they have to work together in order to overcome each new challenge.

Who will survive? Who is the sinister mastermind who devised these challenges? How does he know so much about each of the players? A coda adds confusion rather than clarity to the twisted logic. It seems designed to merely set the scene for the inevitable sequel.

Written by Bragi F Schut (Season of the Witch) and Maria Melnik (American Gods), Escape Room is a high-concept thriller that devises some inventive ways to kill off the characters. The film taps into that current escape room phenomenon, that’s seen thousands spring up around the world. But none are as fiendish or as deadly as the one depicted here. Edward Thomas provides some impressive production design in creating the individual rooms. And Marc Spicer (Furious 7) supplies some nice cinematography.

The director is Adam Robitel (Insidious: The Last Key). He draws influences from a number of films like Hostel and Cube as he creates some elaborate set pieces. His direction is fast-paced and there’s very little flab in the deft 100 minute running time. He effectively ratchets up the tension.

While the characters may seem one-dimensional, the ensemble cast interact easily with each other. A variety of dynamics emerges within the group. Russell (Before I Fall) is a stand-out among the effective cast, while Woll (True Blood) has a strong physical presence.

Escape Room is an enjoyable time at the movies – and something of a guilty pleasure.