By the end I was bawling like a baby.  CATS, the Andrew Lloyd Webber musical as a Tom Hooper-directed and co-written (with Lee Hall) film, is a triumph of theatrics – costuming, make-up, choreography, colour and emotion. 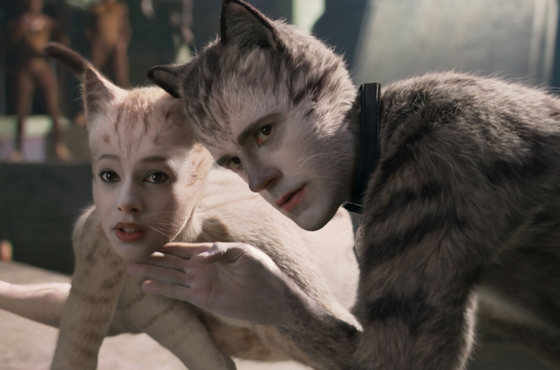 In the original 1980s stage musical, CATS takes place on the night of the annual Jellicle Ball, when Old Deuteronomy – the elderly leader of the cats – will choose one cat to ascend to the Heaviside Layer to be reborn into a new life.  Cats competing to be chosen must perform a song about themselves for Old Deuteronomy.

But the sinister outlaw, Macavity, in his determination to be selected, tries to disrupt proceedings by making the cats that stand in his way magically disappear, leaving him as the only contender. When Old Deuteronomy still refuses to anoint Macavity as the chosen one, Macavity kidnaps Old Deuteronomy too. Just when all seems lost, magical Mr Mistoffelees uses his powers to secure Old Deuteronomy out of Macavity’s clutches.

The musical ends with Grizabella the Glamour Cat, a formerly shunned member of the tribe, performing her song Memory and Old Deuteronomy choosing her as the cat who will be reborn. For the film adaptation, Hall (who wrote Billy Elliot, the film and later the lyrics for the stage adaptation) and Hooper created more of a journey.

Unlike the stage musical, which was set in the 1980s, CATS the movie is set in London in the 1930s, where author TS Eliot – upon whose book of whimsical poems CATS is based – was living and writing. The character of Victoria, who featured in the original stage musical and was a principal dancer in the show, but not a prominent character, is in the film the conduit into the world of Cats. In other words, the filmmakers expanded her character to serve the narrative.

As part of this enlargement, Hall and Hooper gave Victoria a narrative partner in the form of Mr Mistoffelees, a prominent figure in the stage show, whom they modified for the film. At the start of the movie Victoria is thrown away in a sack. She enters the night-time world of the Jellicles and is taken on an odyssey. The neighbourhood cats take her in and teach her about their world, but she in turn teaches them.

The music is breathtaking and the actors assembled for the picture have done a magnificent job bringing to life the characteristics of felines – young and old, regal and proud, aloof and downtrodden. So many get the chance to shine with a series of stellar solos. Of course, all the showstopping numbers are there, but even the lesser known songs become putty in the hands and voices of these artistes.

Dame Judi Dench shines as the wise Old Deuteronomy. Who knew she could sing? So, too, Ian McKellen with an incredibly moving and ultimately uplifting number as Gus, aided by Mr Mistoffelees (Laurie Davidson) who, is critical in affecting the story arc, when prevailed upon to do so.

It is difficult to move past the performances of Jennifer Hudson as the once-lauded Grizabella (what a voice!) and Francesca Hayward, a principal ballerina at The Royal Ballet, as the sweet voiced and good-natured Victoria. Idris Elba positively bristles as the conniving and dastardly Macavity, who is given a leg up by Taylor Swift as Bombalurina. Rebel Wilson makes her considerable presence felt – comically, of course (you won’t forget her) – as houseproud, let it all hang out Jennyanydots.

James Cordon rocks the casbah as Bustopher Jones, Jason Derulo shines as Rum Tum Tugger and Ray Winstone has perfected his scowl as the aptly named Growltiger. I can’t speak highly enough of how impressive the costumes and make-up are. I’m talking Academy Award nomination-type excellence in both categories.

The longer the film ran for the more involved and absorbed I became. As I indicated at the outset, I had tears running down my cheeks with the pathos generated by several musical pieces.

CATS is a film that should appeal to aficionados of the stage musical, which I have had the good fortune to see a number of times since it first played in Melbourne in 1987.

Those who shy away from such forms of entertainment may be more circumspect, but I loved it.