The “lost at sea” scenario played out brilliantly in JC Chandor’s All Is Lost, with Robert Redford. Not so much in the romance drama Adrift, which has Baltasar Kormákur (Everest) at the helm. 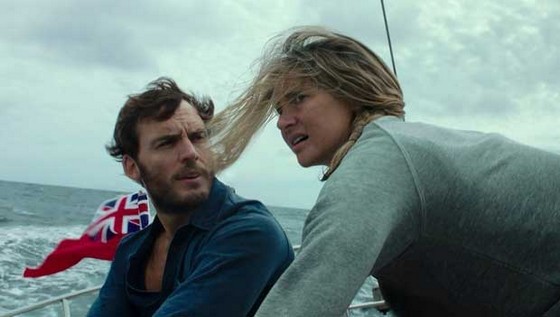 Adrift is based on the true story of two sailors who set out to travel from Tahiti to San Diego in 1983. Tami Oldham (Shailene Woodley) and Richard Sharp (Sam Claflin) couldn’t anticipate they’d be sailing directly into one of the most catastrophic hurricanes in recorded history. In the aftermath of the storm, Tami awakens to find Richard badly injured and their boat in ruins. With no hope of rescue, Tami must find the strength and determination to save herself and the man she loves.

Tami Oldham Ashcraft chronicled the harrowing events of her 41-day ordeal in her book, Red Sky in Mourning: A True Story of Love, Loss and Survival at Sea. The title is a rueful riff on the adage, “Red sky in the morning, sailor’s warning. Red sky at night, sailor’s delight. ”

The movie features strong cinematography from Robert Richardson (Breathe), beautiful vistas and, on occasion, overwhelming sound (music is by Volker Bertelmann (Lion)). Joseph Conrad wrote about the fury of the sea and there are a number of challenging scenes along those lines in the film.

Shailene Woodley’s character is nothing if not resourceful and Sam Claflin bats his eyelids and looks good. In the end we also get to see the real character upon whom Woodley was based, which was a nice touch. There is a sting in the tail, but strangely not a great deal happens. In my head I was constantly calling out for things to move along.

Adrift showcased a number of woolly moments. But has an telemovie feel to it (as distinct from an absorbing big screen adventure) … and it felt far longer than its 96 minute running time.