Every American adult knows exactly where they were on the terrible morning of September 11, 2001. But until recently, only a handful knew about the extraordinary events that unfolded in the immediate aftermath. With the country still reeling, 12 members of the US Army’s elite Green Berets left their homes and loved ones to take on a perilous mission in war-torn Afghanistan. These “12 Strong” were chosen to strike the first blow in America’s response to the terrorist attacks. 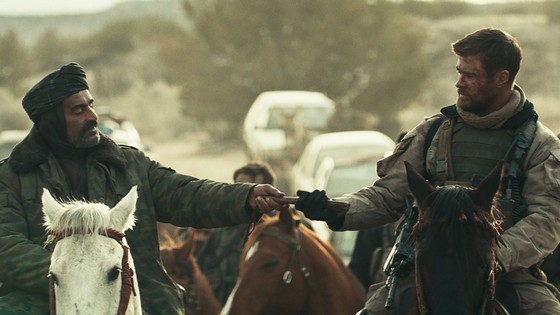 Now director Nicolai Fuglsig brings the true story of these dozen warriors to the big screen. Screenwriters Ted Tally (The Silence of the Lambs) and Peter Craig (The Town) provide the script, adapted from the book Horse Soldiers by Doug Stanton.

In a nutshell, 12 Strong is predictable patriot fare. Zero Dark Thirty this is not. What I can say though is that a number of action sequences are intense and visceral.

The film begins with a less-than-convincing exchange between a captain and his commanding officer in the wake of the Twin Towers attacks. Then the soldiers have to farewell their wives and children in scenes of angst. Next, testosterone flows in a “boys will be boys” display of mateship to show us just how bonded they are. I wish I could say there was even one line of dialogue here that had even an iota of originality.

There’s confusion over how trustworthy the ragtag bunch of Afghanis the Americans have come to help are. In other words, will this detail be killed even before they start their mission. And, finally, Fuglsig gives us a phenomenal heroic victory against the odds.

The fact that this victory was achieved on horseback does, indeed, add an element of interest. But the actors, led by the reliable Chris Hemsworth (Thor: Ragnarok) and Michael Shannon (The Shape of Water), are unfortunately at the mercy of an uninspiring script. The movie seems to go on interminably. It needed a lot of tightening.

The material, although compelling in itself, suffers from the kid-glove treatment. 12 Strong is watchable, but uninspiring and decidedly lazy.