Between Us is Clare Atkins’ second young adult novel. Like her first novel, Nona and Me, Between Us uses personal stories to explore cultural politics in Australia. Three distinct voices tell the story of Between Us— Ana, Kenny and Jono. 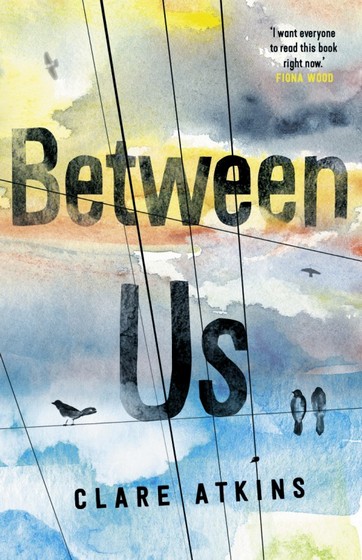 Ana, is a teenage asylum seeker from Iran. She lives with her pregnant mother and toddler brother in a detention centre in Darwin The family must wait for news about their refugee status. Ana can only leave the detention centre to attend school.

Kenny, a Vietnamese-Australian works as an officer at the same detention centre. Detainees describe Kenny as ‘one of the good ones’. But Kenny soon discovers that his his colleagues interpret his kindness as not only weak, but dangerous. Kenny’s values are being challenged, yet he can’t risk losing his job. At home, Kenny is struggling with his new role as a single dad to his increasingly distant son, Jono.

Jono has lost both his girlfriend and his mother to other cities. Now his older sister has left for university. Jono’s friends are protective of him, knowing he is just keeping his head above the deep waters of depression. Their ways of helping him aren’t necessarily leading him to make healthy decisions though. He’s been hurt, and is finding it nearly impossible to connect with his father. Jono finds solace in listening to music, something he and Ana have in common. Jono meets Ana when she joins the Year Ten cohort at his Darwin high school, and a relationship develops between the pair.

Between Us is poetic. At times sweet, at times brutal, it has a power that crept up on me. Atkins doesn’t talk down to her readers. Nor does she overplay the dramatic, emotional moments of the story. She imbues her characters with both vulnerability and resilience, doesn’t alienate adult readers with too much teenage angst. At the same time as Atkins deals with complex issues, she maintains an astute eye for the closer-to-home worries of young people as they navigate romantic, peer and family relationships.

Atkins’ prose style is fast-moving and succinct. Her characters are distinct. With pop-culture references and Australian vernacular throughout, the book is one for Australian young people. While the reader can see inevitable conflicts developing both inside and outside of the detention centre, the characters are kept from being able to see important elements of the others’ realities. The stakes for all the characters, but particularly for Ana and her family, are extremely high. The tension in tight and the story genuinely moving.

The author spent time in multicultural Darwin high schools when she was writing Between Us. She interviewed asylum seekers and detention centre employees. The time she spent getting to know her settings and the people in them is self-evident. Between Us is likely to prompt readers to think critically about racial generalisations, media representations of migrants and asylum seekers, and about family and culture in Australia. It contrasts beauty with ugliness, kindness with cruelty, and helplessness with resilience. The story deals with difficult topics without salaciousness, including mental illness, family separation, and self-harm. Ultimately, this story invites readers to relate to Ana, Kenny and Jono.

Atkins’ book challenges young adults to consider how many stories like Ana’s, Kenny’s and Jono’s are being lived right now in our country. She ends the book with a factual summary of Australian’s asylum seeker policies, and how many people are currently in detention in Australia. Though Atkins doesn’t ask us directly, readers are left to question whether or not Australia’s current policies on immigration detention are ones they are willing to accept. If we don’t accept them for the character Ana and her family, how then, can we accept them for the real Anas?

Between Us is published by Black Inc., and is available now.