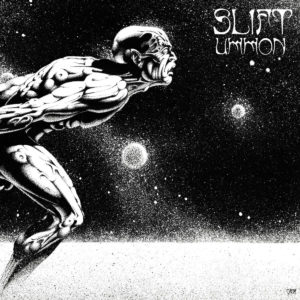 French psychedelic trio SLIFT started things off back in 2017 when they released their debut EP, Space Is The Key, via one of our favorite labels in Howlin’ Banana Records. Their debut LP, La Planète Inexplorée, then followed in 2018 and found the band exploring their garage psych sound and taking more time to experiment with different instruments. Now SLIFT have returned with the double LP Ummon, which is a momentous space odyssey of a record that from its cover, to its theme, down to its last chord, is a mesmerizing journey of acid krautrock, grinding garage, cosmic jazz, new age prog, and modern psych that are all fused together with enough heavy guitar parts that the album could fit into your metal collection.

The title track kicks this record off and it completely sets the tone as SLIFT raises its muscular might from the opening strum for an engaging 1:40 before the vocals of Jean Fossat deliver the lines “Set the controls to the earth’s surface / (From the night we have waited) / Bring the fire to your sleeping brothers.” They are just the first set of lyrics that transcend you to another dimension as the music swirls around you. The nearly 6 minute track hardly lets you take a breath and is a huge adrenaline rush as it preps you to seat-belt up for Ummon’s next 67 minutes.

What I like about SLIFT is that they are not one dimensional as they expertly dip into an array of genres. For all of the space rock and hefty bass lines the band can produce they also dial up the over 10-minute “Citadel on a Satellite,” that in several parts drifts over calm seas like stand out tunes from Japan’s Kikagaku Moyo. The track is just one example of their multiple styles as the band also provides two completely instrumental pieces with “Sonar” and “Aurore aux Confins” that never flex but are just precise. With that said, SLIFT can show restraint in places because there are a multitude of times they bust out of your speakers. The 13 minute closer “Lions, Tigers And Bears” is a memorable ending with its spacey synths, flaming guitars, boisterous vocals and thunderous ending that then just fades into a hum.

If you are not familiar with SLIFT they are a band that will win you over quickly if you have even just dabbled into this new era of pscyh music. The trio still provides fuzz and high energy vocals but Ummon shows so much growth from their earlier releases as everything here falls into perfect place. SLIFT have produced a fantastic double album in Ummon that fantasizes about the future but completely plants its brawn in the present!