Compulsive hoarding (from which an estimated 1.2 million Australians suffer) is a major mental health issue. It is also ripe for comedic treatment and it sure gets the once over in Benjamin Law’s assured debut play, a world premiere by MTC.

Humorous and at times poignant, Torch the Place focuses on a Chinese Australian family. Mum (Diana Lin) is nearing 60 and has bounced back after recovering from cancer. She is looked after by her eldest daughter Teresa (Fiona Choi), 38, who – try as she does – can’t fall pregnant. Mum’s life has been far from easy. She felt trapped in a loveless marriage. Her husband – a philanderer – ended up leaving her. But her heartbreak is greater than that, details of which are revealed in the play.

Mum is also an inveterate hoarder. You name it and she collects it – from the quirky and ridiculous to the bizarre and disgusting. Her home and yard are overrun with things – box after box. There is everything from an old broken piano and electronic appliances to kids’ toys, VHS tapes, newspapers and magazines and a toilet bowl with a frangipani growing out of it – even period pads and much, much more.

It may be an eyesore and a fire trap, but in spite of the house being overrun, mother won’t get rid of any of it. She is about to get the ultimate shock though when her three adult children congregate to give her a surprise special birthday present. They have hired a skip and over a few days they intend to de clutter their childhood home. You can just imagine the resistance they meet … for mum sees her place as a museum of irreplaceable treasures.

Through the ensuing process, her children and Teresa’s partner Paul (Max Brown) – who helps out – bicker with each other and with mother as more is revealed about each of them. Younger daughter Natalie (Michelle Lim Davidson) is a successful and rather vacuous social media influencer, while son Toby (Charles Wu) cares deeply about the planet, bemoaning materialism and a capitalist culture. As for son-in-law Paul, he takes every opportunity to push an investment philosophy.

The characters are rich and colourful, the writing pithy and insightful and the direction assured. Although the language is predominantly English, because of her background, mother frequently resorts to short bursts of Chinese, which serves to add authenticity to a well thought out narrative. Each of the characters is well drawn and realised, with their own strengths and vulnerabilities. Let’s just say director Dean Bryant had a rich tapestry to work with. Many of the one liners are gems. The opening night audience was frequently in stitches. 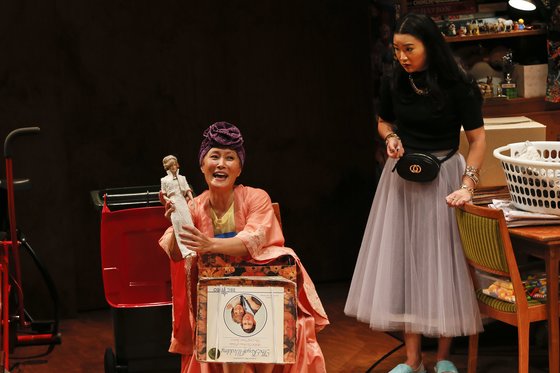 The set is nothing short of a master work of creativity and execution by Isabel Hudson. A rotating central stage stacked high with precariously balanced stuff then exposes the innards of a barely liveable home. Later, it is the movement of the odds and sods that left me full of admiration and amazement.

Torch the Place is a delightful play with an ending that doesn’t ring true. That was my only gripe in what was a most entertaining and engaging night of theatre. It is playing at Fairfax Studio, Arts Centre Melbourne until 19th March, 2020. I saw the first preview performance.