This female buddy road movie is firmly aimed at the very same demographic who flocked to films like The Best Exotic Marigold Hotel and The Lady in the Van. It‘s more doubtful however that they’ll find that the title here lives up to its promise. The Time of Their Lives promises much but proves to be a rather uneven and cliched road movie – a sort of geriatric Thelma and Louise, if you will.

It’s been nearly thirty years since Pauline Collins went on a journey of liberation and self-discovery in the beautiful Greek islands in 1989’s Shirley Valentine. Now she is back on another journey of self-discovery full of gorgeous sun-dappled European locations, and continental sex. Her companion on this odyssey is none other than Joan Collins, in her first substantial role since she ended her eight-year reign as the bitch queen of the small screen in the soap opera Dynasty. 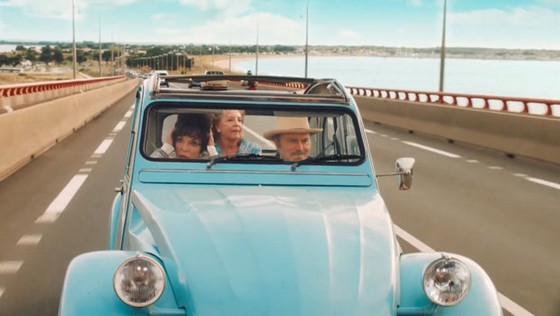 Helen (played by Joan Collins) is a faded former screen siren who is now broke and living in a retirement village, her glory days largely forgotten by most people. But she senses an opportunity to find one last shot at fame and reviving her career when she sets out to attend the funeral of a famous film director who was once her lover. The funeral is to be held in the picturesque coastal resort town of Ile de Re in France. “It’ll be like the Oscars,” she says, “a bit sadder, but not much.” Helen sets out on a day bus trip with the other old fogies from the retirement home, planning to make a break for it and find her way to France.

An improbable series of events brings here into contact with Priscilla (Pauline Collins), a frumpy, downtrodden, timid and largely neglected housewife who is trapped in a loveless marriage. The accidental drowning of her young son thirty years earlier drove a wedge between her and he surly husband Frank (Ronald Pickup). While out shopping with the cantankerous Frank, Priscilla ends up on the bus with Helen. Thrown together by circumstances but also drawn together by a shared sense of loss and loneliness and a desperation to find some meaning in their lives at this late stage, the two head off on a journey by bus, ferry and car. Along the way they bicker, but also reluctantly bond as they share secrets and revelations. Their clashing personalities make for some humour and pathos.

Along the way they also encounter Alberto (Franco Nero), a famous local artist and aging Lothario, whose amorous intentions cause some simmering jealousy to taint the relationship between the two women.

The Time Of Their Lives is a cliched road movie that has been unevenly directed by writer/director Roger Goldby. This is Goldby’s first feature film since 2007’s The Waiting Room; he has spent the last decade working in television helming episodes of Death in Paradise and Call the Midwife. His direction lacks real flair and he gives the material an episodic nature. Some quite absurd moments require a suspension of disbelief that many in the audience may be unwilling to go along with. The film is tonally uneven too, mixing some easy laughs and lighter moments with some darker material, deeper truths about aging, getting old, the past, and confronting past regrets.

But the film at least gives weighty and nuanced roles to two veteran female actors and they rise to the occasion. The Time of Their Lives gives Joan Collins her best and most substantial role for a couple of decades as the narcissistic, selfish and self-absorbed Helen. She revels in her character’s nasty streak and there is also a sense of self-reverential humour to her performance as well. She also reveals the deeper sadness that drives her character. She is playing a character closer to her own age (she is after all 83) but she still shows touches of that sexuality that she brought to her roles in lurid melodramas like The Bitch and The Stud, both of which were based on novels written by her sister the late Jackie Collins.

For her part, Pauline Collins gets the better role here with a more engaging and emotional backstory. She brings a vulnerability and naivete to her nuanced and layered performance. But this film also shares a few thematic similarities to her earlier, and superior, Shirley Valentine. Nero brings an earthy quality to his Alberto, while Joely Richardson contributes a small appearance her as the dead director’s daughter.

The film has been nicely photographed by Goldby’s regular cinematographer James Aspinell (who has worked with him on The Waiting Room and numerous TV episodes) and he gives us some great vistas and gorgeous locations. While audiences of a certain age may well enjoys elements of the film and may well dream about their next holiday to France, it is unlikely that they will have the time of their lives at the cinema.