Isn’t the cover of Holly Ringland’s debut The Lost Flowers of Alice Hart gorgeous? The inside is just as lovely, too – it’s beautifully designed. There’s been a lot of hype about this book so I was looking forward to reading it for myself, and the idea of women living and healing together through working with flowers/nature really appealed. I also have a thing for flowers, especially native wildflowers, so I was particularly drawn to the descriptions at the start of each chapter. 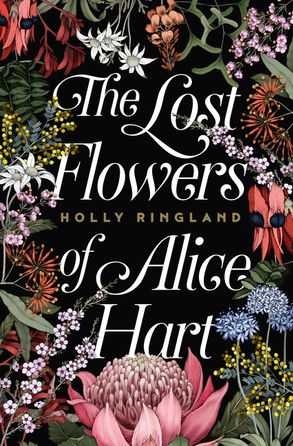 After her family suffers a tragedy, nine-year-old Alice Hart is forced to leave her idyllic seaside home. She is taken in by her grandmother, June, a flower farmer who raises Alice on the language of Australian native flowers, a way to say the things that are too hard to speak.

Under the watchful eye of June and the women who run the farm, Alice settles, but grows up increasingly frustrated by how little she knows of her family’s story. In her early twenties, Alice’s life is thrown into upheaval again when she suffers devastating betrayal and loss. Desperate to outrun grief, Alice flees to the dramatically beautiful central Australian desert. In this otherworldly landscape Alice thinks she has found solace, until she meets a charismatic and ultimately dangerous man.

Spanning two decades, set between sugar cane fields by the sea, a native Australian flower farm, and a celestial crater in the central desert, The Lost Flowers of Alice Hart follows Alice’s unforgettable journey, as she learns that the most powerful story she will ever possess is her own.

Ringland has a gift for description and at times, her writing is evocative and vivid – those moments jumped out and I nodded the way a writer does when they’re taken with someone’s turn of phrase (and wish they thought of it first). However, it wasn’t consistently so, and the abrupt time-shifts from Alice the child to Alice the eighteen-year-old to Alice the twenty-something took me out of the story, which was a shame. And while the writing certainly has its evocative moments, especially in terms of setting, it didn’t quite hit the spot emotionally in the second half.

There’s a lot of heart and love in this book but sometimes I just didn’t feel it even though I knew it was there. I wanted to feel more. Ever feel like that when you’re reading?

The Lost Flowers of Alice Hart (published by Harper Collins Australia) is now available online and at good bookstores.