Disney gives The Lion King a Jungle Book treatment, turning animation into a blend of live action and computer-generated imagery. The visual effects are spectacular. If you haven’t seen the 1994 original cartoon version, I suspect you’ll be satisfied with this 2019 representation of the story of young Simba’s rise. Director of The Jungle Book, Jon Favreau, is back for a second helping. 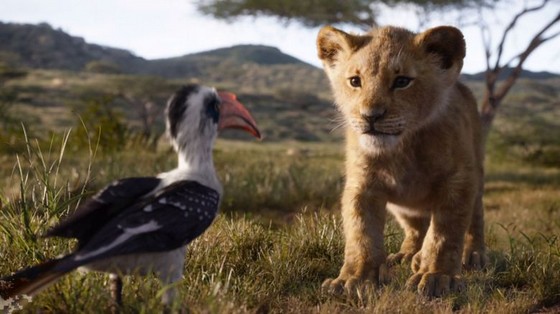 The story follows the familiar narrative arc of an adventurous lion cub, Simba (voiced by Donald Glover). The young lion is driven into exile after the untimely death of his father, King Mufasa (James Earl Jones, who reprises his role from the original). Simba struggles to accept his responsibilities before being drawn home, which has been laid bare by his wicket uncle, Scar (Chiwetel Ejiofor) and his evil sidekicks, the hyenas. At the same time, Simba finds love with his oldest friend, Nala (Beyonce), as he ensures the continuation of the Circle of Life.

Three characters add much-needed humour. Zazu (John Oliver) is a hornbill, loyal to a fault. He is the eyes and ears of the kingdom, reporting the good and not-so-good news of the day. Billy Eichner lends his voice to Timon, the wisecracking meerkat who discovers a downtrodden Simba after he flees his home in shame. Timon and his best friend, perpetually gassy warthog Pumbaa (Seth Rogen), take in the lonely cub and teach him how to survive in their spectacular habitat.

The look of the animals and their surrounds is eye popping. It’s hard to believe what the filmmakers have achieved. Having said that, I had several problems with the movie. Because photo realism was their goal, they couldn’t show emotion in the faces. While I could grudgingly accept talking animals, when it came to seeing them sing, I’m afraid it didn’t wash. It looked awkward. It would have been better if they featured the soundtrack without trying to convince us the creatures could warble.

As far as the reworked musical numbers are concerned, by and large the original was better. I found the first half relatively slow going with a number of flat patches. The original was 88 minutes and here they have managed to add another half hour (the screenplay is by Jeff Nathanson [Catch Me If You Can]). Having said that, the picture kicked up a gear when Timon and Pumbaa entered the equation and it needed to.

While I found the new Lion King engaging at times, it didn’t live up to my expectations of something out of the box, except for the CGI.