Two gifted and extremely funny actors create an even bigger farce out of an already brilliant Victorian farce in an hilarious adaptation of Oscar Wilde’s The Importance of Being Earnest. They take Wilde’s late 19th century play – the ultimate comedy about manners – and turn the screws, assuming nine roles between them.

David Wood and John Haynes frequently walk off stage and moments later re-appear as different characters, courtesy of a dress, hat, robe or unkempt wig. On occasions they play different characters simultaneously while on stage, simply by holding onto a dress.

The production is manic and marvellous, as two serious-faced men give us slapstick comedy at its finest. The camp it up and give the trivial importance … at least in the names of their characters.

The Importance of Being Earnest is, in essence, about love and marriage. The protagonists maintain fictitious personae to escape burdensome social obligations.

My finest moments came when big, burly Woods turns coquettish, as he does with some regularity. Wearing a dress, with a flutter of the eyelids, a tilt of the head and a playful finger, the preposterousness of that image isn’t lost on anyone. His metamorphosis from strait-laced butler to playful layabout, too, is a sight to behold. And that wig on his bald head all but becomes a character in its own right. Arguably with less gushy personas, Hayes also capitalises upon the pair’s (along with Jude Kelly’s) brilliant adaptation of the source material. 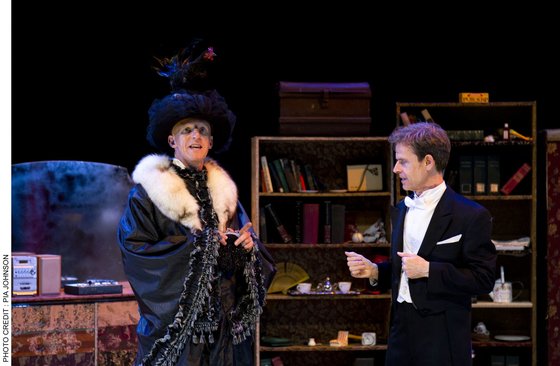 The large, busy and sprawling set is characterised by a surfeit of cupboards and drawers covered in mismatched wallpaper, and wall-to-wall carpeting. There is even a cloth covered fridge (I kid you not). The costuming – elegant frocks, tails and a black frilly hat adorned with a regal chook – also shows creativity in spades. The set and costume designer is Zoe Atkinson, whom I can’t praise highly enough.

The more often than not dramatic – at times contemporary, up tempo – musical stings add to an evening of theatre the likes of which you are not likely to forget in a hurry. Exuberant and effusive, never before have I regarded The Importance of Being Earnest in higher regard than I do today. Directed by Jude Kelly, it is playing at Merlyn Theatre at Malthouse Theatre until 8th March, 2020.