Through the centuries, mankind’s tendency has been towards total control. Malthouse Theatre explores that tendency in the sci-fi drama Solaris.

The play is a theatrical adaptation of Stanislaw Lem’s philosophical novel about extraterrestrial intelligence. Movie adaptations followed in 1968, 1972 and 2002. 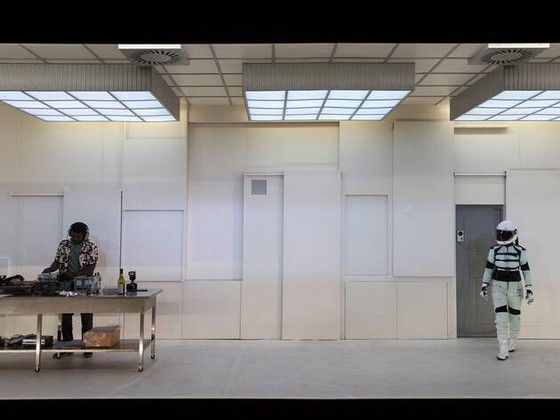 Drs Snow (Fode Simbo) and Sartorius (Jade Ogugua) have been on a space station orbiting and studying a distant planet called Solaris for almost two years. The planet is largely covered by ocean. Until recently the team was led by Professor Gibarian (Hugo Weaving) – seen only through video transmissions – who has since died. The arrival of psychologist Dr Kris Kelvin (Leanna Walsman), a protégé of the late Prof, changes everything.

Over time, the crew has been experiencing manifestations of their previous lives. Their loved ones appear to them as “copies” – replicas made of water. The first appearance of anything abnormal was of objects, then “monsters” and finally human likenesses. For instance, a six-year-old girl (Flora Feldman – in an alternate role with Marlia Chofor) has been roaming the corridors – a youngster who we later find out looks exactly like the dead daughter of Dr Sartorius.

But before Dr Kelvin arrives there has been no conversation with these “visitors”. Activity steps up markedly after Dr Kelvin wakes up to find a representation of her former partner, Ray (Keegan Joyce), lying next to her. The pair begins to communicate and although she quickly learns he is not the real Ray, she falls in love all over again.

Professor Gibarian was convinced the planet Solaris was sentient and was trying to probe the thoughts of the humans studying it. Truth or fiction? Is Solaris friend or foe? Are they falling prey to it? Has Dr Kelvin lost her professional objectivity in spite of Dr Sartorius constantly reminding her that Solaris’ Ray is not real? Many relevant questions, indeed. The answers are for us to individually interpret.

Solaris is a fascinating, brain-teasing theatrical production, skillfully realised by a talented cast. Most attention rests on the lonely figure of Dr Kelvin and Leanna Walsman does a fine job bringing her to life. Ray’s naïve doppelganger is well concocted by Keegan Joyce. I was also thoroughly impressed by the gravitas Hugo Weaving brings to his role.

The staging, lighting and sound are features of the production. As a result, we are privy to the stark realities of life inside the orbiter – the mood governed by different colours. The set and costume designer is Hyemi Shin. Paul Jackson is responsible for lighting design and Jethro Woodward for sound design and composition.

Solaris did, indeed, transport me to another world and made me think about our caustic nature. That is in no small part thanks to Scottish writer David Greig’s adaptation of Lem’s original work and the tight direction of Matthew Lutton.

Solaris is playing at Merlyn Theatre at Malthouse Theatre until 21 July 2019.