Savage is brutal, devastating, powerful. It features a war of attrition borne of a tyrannical upbringing in New Zealand told in three time-frames over 24 years.

Savages is the name given to a patched-up gang started by a couple of cell mates from juvenile detention. But let’s go back a step, Danny – known in the gang as Damage (Jake Ryan) – is right hand man (or sergeant) for gang leader Moses (John Tui). Danny came from a big family, but his father had a vicious temper, which was easily set off. After breaking into a shop, he went to juvie, where the overseer used violence in an effort to control the kids. 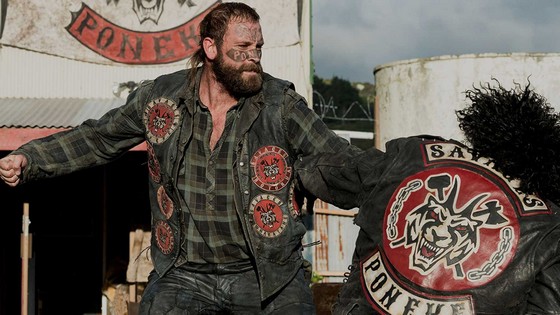 Once Danny and Moses get onto the streets they quickly realise how difficult it is to survive. Moses decides to start a gang, after he spots the pubic reaction to another patched mob. The Savages quickly swell in number. They hang out together, drink, fight and exact punishment at Moses’ instigation. Danny (by now known as Damage) is the man to ensure others are put in their place. That includes a run-in with his brother Liam (Seth Flynn), whom he hadn’t seen in years and is now a member of a rival gang. The result of that is ugly.

Savage doesn’t hold back in painting a searing portrait of the consequences of verbal and physical abuse. The message is clear – violence begets violence and becomes a vicious circle. And all of that leads where? Nowhere … because the stock in trade is fear mongering.

Three actors fill the respective key roles of Moses and Danny/Damage. It is undoubtedly Jake Ryan (The Sapphires) as Damage in his mid 30s who has most impact. Complete with striking facial tattoos, his characterisation is that of a man possessed and torn asunder by a life which has amounted to nothing. Damage is caught between a rock and a hard place. As Liam says at one point, he has become a chip off the old block – significantly more hard core, if truth be known.

Writer and director Sam Kelly has painted a powerful portrait of the soul-destroying nature of gang life. The film was inspired by the stories and history of New Zealand’s violent street gangs. The decision to move back and forth through three time periods was a masterful one. Savage is a film that has impact and resonance and won’t easily be forgotten.