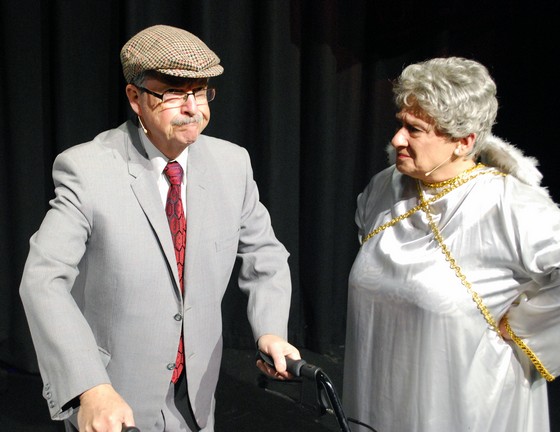 This new play from Jack Felman concerns a Jewish couple, Mania and Velvel Pszeszekowski. Having brought up four children, Mania has passed on – in fact, did so five years ago – and Velvel is about to join her. In the intervening period, Velvel has continued to speak with Mania – at least imagine what she would be saying to him and vice versa. Velvel has been celebrating his 90th birthday at a pizza joint, when disaster strikes. Mania already has “wings” – she’s an angel. But like all newcomers to the hereafter, Velvel will be judged in an angel court to determine whether he is worthy of entering the pearly gates. That involves the “prosecution” and “defence” arguing the value of his earthly deeds.

The audience witness a number of “episodes” from their lives together … in their infinite glory. One thing is certain, through more than 60 years of marriage, the “kvetching” (nagging) has been consistent. At one stage, Mania and Velvel even sought the services of a marriage guidance counsellor – as if that was ever going to do any good.

The humour comes thick and fast. Oy Mama Gevalt is pacey, entertaining and funny. Many of the jokes are oldies but goodies, however there’s also plenty of fresh material. The play has been wonderfully conceived and executed. I was particularly taken by the wit and delivery of Felman as Velvel (and in a memorable solo routine as an aunt). In fact, all three players – the others being Lena Fiszman as the irrepressible Mania and Allen Brostek, who plays the pizza man, a rabbi, the legal eagles and the therapist – fill multiple roles. 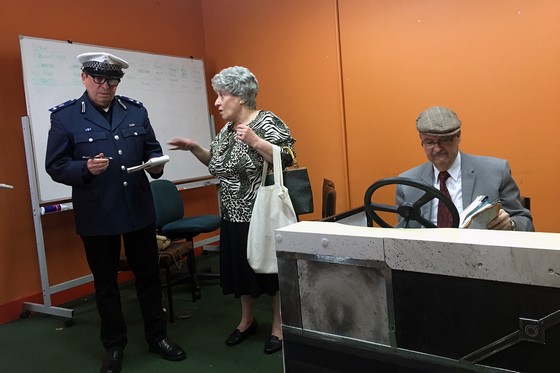 For Jews and South Africans in the audience, the familiarity of the stereotypes will be particularly endearing. While staging is kept to a minimum, the simple props used do the trick very nicely. Over the past 25 years this troupe, known as Los Trios Amigos, has brought us four (and now five) plays that explored the life of the Pszeszekowski family.

An excellent free program includes valuable background on the show, as well as a glossary of Yiddish terms Directed by Eli Erez, OMG – Oy Mama Gevalt has a great deal going for it. It’s playing at Chapel off Chapel until 12 August 2018.