Noni Hazlehurst (right) has been touring this one-woman masterpiece for more than two years now and everywhere she has packed the venues and earned wide acclaim. After watching her performance at the Cremorne there is no problem in understanding why.

The whole package, from words and performance, to lighting, set and sound, was perfect theatre; sheer entertainment with pathos interspersed with humour dark and light and a character so real that it cut deep into the heart. Rarely have 75 minutes passed so quickly. 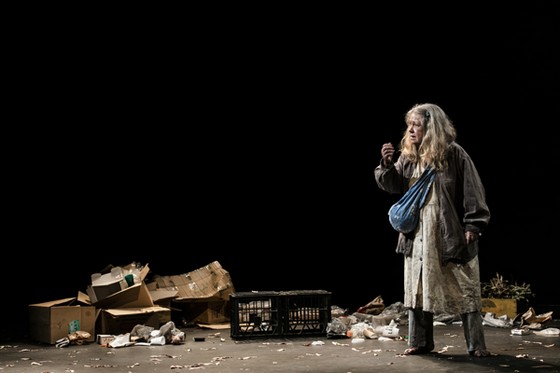 Christie is someone we have all seen rummaging in rubbish tins with a huge striped bag hanging from her arm. She is the archetypal homeless person, dirty, flea ridden, shunned by adults, and ridiculed and abused by cruel children.

As the audience wandered into the theatre Christie was on stage in filtered light, the beginning of some fine work from lighting designer Tom Willis. This along with a magical sound design from Darius Kedros kept the mood changing as the situation demanded. Birds shrieked in the background as they fought Christie for stray crusts.

She wandered through Kat Chan’s park set, through strewn autumn leaves and the detritus of the homeless; plastic bags, milk crates and strange, pathetic parcels that surrounded a water-filled bird bath.

Her hands shook and she muttered to unseen ghosts of the past and scratched intermittently at her body. Then the lights came up and she began to talk and took us through her life from domestic subservience to Lenny, a man dulled by hard manual labour, alcoholism, and mental illness. Life became even more difficult after the birth of the baby.

The script brilliantly lays own facts and not opinion. The words lay no blame. The audience has to make up its own mind whether Lenny is to blame for her fall, or whether he was justified in his treatment of Christie. 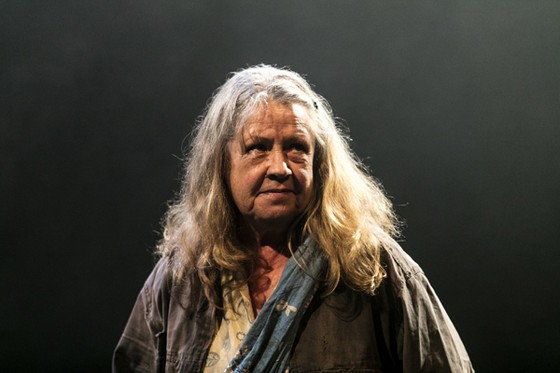 As for Noni Hazlehurst…well. She immersed her own happy, bubbly true self into this wounded and damaged piece of humanity so convincingly she had the audience close to tears and then laughing with relief at some caustic joke.

For all her failings and her severe mental illness, she did not cry for sympathy, there was no “poor fellow me”. Hazlehurst and director Matt Scholten made Christie strong. After a spell in a secure mental hospital she refused a bed in a refuge, which she saw as a waiting room for the mortuary. It was her life and she intended to live it her way, no matter how hard and uncomfortable it became.

It was a supreme, hypnotic performance from a brilliant actor which will stay in my mind for a long, long time.